We just love the Air

I can't help but feel the same like Mr. Spock from Star Trek did when he saw computers in his journey across space. The funny thing was the computers did not have screens even in the future but worked on voice interactivity. It can be attributed to either the fact the real future will have no screens any more just processors or the fact that in those times the computers would print on paper rather than display on a screen. so the producers could not image things like Laptops, iPhones, etc.

This is not a review about star trek gadgets and nor is it about the evolution of computers, but of a product that we reviewed earlier. What, a repeat review, not exactly. On 21st February, we reviewed Air Display, an app for the iOS devices that allowed the user to extend their mac desktop onto the iOS devices. I personally thought that was an amazing thing. It was the best thing to have happened. I could not get over the fact that I could actually use my iOS device as an additional external device just in case I needed it.

My Macbook pro battery had died on me, and I was running out of space on the 250 GB hard disk, I could have upgraded that to a higher capacity drive, but the battery would have still been an issue and since I required a machine for all day use, a Laptop is hardly the device for an always on use. So just before Christmas I decided to pamper myself and went to purchase an iMac, I ended up purchasing a 27" just because they were the only ones that allowed to be used as an extended monitor for other laptops or devices. How excited I was, it's a 27" Monitor capable of being a computer, after adding an additional 8GB of RAM, this machine was am amazing machine with 12GB RAM. However I was quite disappointed at Apple, as I could not get the iMac to act as a monitor for my other devices. I did find that I need to have multiple (non common) cables and then I *might* be able to get the input onto the iMac. It was quite shattering, but the experience of an iMac 27" and some shopping for technology can heal a lot of things. I did heal but did not quite forget that I purchased an iMac for what it could do and it did not do what it was expected to do. 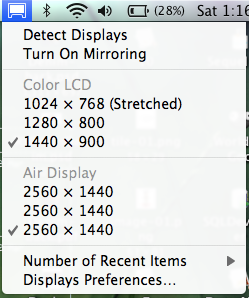 When I received the Promo Code from Avatron Software, Inc, I was excited once again, but at the same time a bit cautious did not want to undergo disappointment again. (For some reasons, I get a high when I am able to connect all my devices together, I have accumulated so many cables and plugs over the years and chided for spending money on things that I would never use.. that's another story) So after I installed Air Display on my iMac, I switched on my MacBookPro, this already had the AirDisplay Client software as I had tested the iOS display with quite a few scenarios. After loggin in and all the apps having loaded, I could see my iMac in the drop down menu and upon selecting the iMac, my iMac screen went blue then displayed the Mac OS X Wallpaper, moved the mouse over to the right, yep, it went through on to the iMac. Moved a window over, it was crisp and there was hardly any artifacts or issues.

I had the client on my iMac too, just for fun sakes, I started Air Display on the iMac and the client on the iMac and tried to connect the client to the same device as the server. I expected some spectacular things to happen (like a crash or something to that effect) I was surprised, I got a window on the Desktop that displayed the extended screen. I moved the cursor and some windows, yep, it was the extension, right, but it was quite small. I could resize that to the size I wanted. Hyperspaces recognized them as two displays and the system also believed they were two displays. 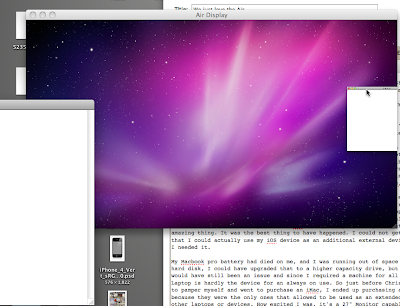 I can say that finally the dream has come true, I can use my MacBookPro with the iMac as a monitor. There are hardly any settings of options to really write about. The software works out of the box (so as to say) Start the AirDisplay Server, on the AirDisplay Client (Mac or Windows, yes it works with Windows too) select the Server and that's that. Nothing more to do.

AirDisplay is priced at $19.99 and available on the Mac App store. If you own more than one Mac Device, the App store lets you download the software on them all. If you were to go and get the Mini-Display to VGA or Mini-Display to DVI cable, we are talking $30 then you also need the DVI Gender converter cable, another $10-$20, so you are already behind by about $40. Instead, with Air Display, there are no cables to tinker with, (it works on the WiFi network).

If you have an older laptop, use it as an external display without any cables. I could not verify if it will work with more than one device. I am guessing it won't at this point of time, but I won't write that off just yet. Given the track record and the products Avatron has produced, It would be just about round the corner. A display out from the iOS device to a Desktop would also be just round the corner,(but I think Apple won't approve that as it wants to sell those cables and make money)

Getting used to purchasing software off the iTunes store, we are all spoilt and expect the price of a software to be in the range of $0.99 to $4.99, so on the face to things, $20 seems like a lot of money for a software, but if someone that is contemplating AirDisplay and feels that is a lot of money obviously has never went out looking for cables, and to be more precise Display Cables. The software pays for itself and the hassles you would face with cables almost instantly. This is the future of displays to come.

We recommend that everyone that has more than one Laptop or desktop and could/would want to link the two devices in terms of extending the screens, do not think much, just download Air Display.