Move over little green men, the real army is here. The latest in turn by turn, strategy Army Game is here, it is called Great Little War Game and it is hot and available on the iTunes store. With 3D Graphics and gameplay like never before.

As a rather older gamer, I have seen games starting from the 8-bit consoles like the ZX Spectrum, C=64, BBC, then moving on to the then State of the Art, Atari ST and Amiga 500 to a PC, with PS1, Dreamcast, Saturn, MegaDrive, NES, GameCube, PS2, Wii, XBox and PS3, not forgetting the GBA, AGB, DS and then the iOS. There is a large range of games that have been published on these platforms. Of these my favourite platforms have been the Spectrum, Sega Saturn, PS2, XBOX, ABG and the iOS. The reason for just these consoles over the others is that the Graphics and Gameplay have been kind of best on these. Sega Saturn was not much of a hit, as it was killed off with the near simultaneous release of Dreamcast to counter the PS1. The Advance GameBoy has been my favourite purely for the graphics, I cannot deny that some of the best graphics have been seen on the AGB, the games are all so wonderful and engaging. One particular one comes to mind instantly when I think of The Great Little War Game and that is ... any guesses? Advance Wars.

This is similar in concept to Advance Wars but entirely different and it is so much more entertaining. There have been efforts by a couple of developers to create a game like Advance Wars for the iOS but the efforts have been average.

Now what is so great about the Great Little War Game (GLWG) from Rubicon Development? This game is simple, the two factions, the player (Blue team) and the computer (Red Team) are at war with each other. Each side can move all the units but turn by turn. More units can be created from the various locations (Factories, Airports, Shipyards, Barracks) It is easy to understand that each unit has an element where it is strong and can counter another. In each move, the units can move a particular range and can attack an enemy unit if in range. After all units have been moved (the ones that the player wants to, there is no pressure on moving all units, if not required) the player ends the turn to allow the Computer AI to play. This is called a Day in the game units of measurement.

Each Level/Game has a par score of certain number of days in which the game is expected to be completed for a Golden Cup victory or a Silver cup or a bronze cup. There are enough units and levels to keep one occupied for a long long time, this is a game that is so much fun and keep one engaged and occupied for hours. This is definitely not the pig and bird type of game that one can play while waiting for transport and a few minutes to spare. Though there are facilities for saving an loading the game, for maximum pleasure, this is best enjoyed on a longer journey or with time to spare. There are 22 units to be precise and 20 levels that come with the game with option for more in-app purchases that are coming soon.

The game is not just the brilliant gameplay and 3D graphics that provide for immersive gameplay but also the sound/music and voices for the units. The unit voices called speech packs, can be purchased as in-app purchases and there are about 6 of those with the included Marine Pack and options such as Redneck Rampage, Vive la France, Mexicanos, Wunderbar and the Brits are coming. Of these my personal favourite is the Mexicanos voice pack.

The units are introduced in the game as the game progresses so gradually build upon the expertise with each unit.

Interwoven into the game is a blend of British Humour from Rubicon Development. The game start dialogues between the General and the soldier make for some interesting read. One that I cannot forget is the general quipping "That's where I shall be leading the men, Courageously from the rear" or "I love the smell of Explosions in the morning" 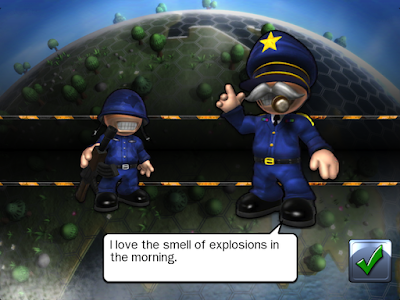 There is a lite version available for those that want to try out the game before spending on it. The game is equivalent like any of the Gameloft/etc games or better but priced at a very nominal price. I have spend more money on games that do little, at $0.99 for the standard version and $2.99 there is no reason to think twice to but pick it up.

There are a lot of features packed into the game that are tucked under the settings tab. However we are told by Rubicon Development that there are a whole lot of features already on their todo list for the next version, like Undo, some UI enhancements. In our recommendation, go for this game, this is one that shall be hours of fun for sure and value for money at the same time.

Rubicon development have also made available trading cards of their units that you can download from our site at http://reviewme.oz-apps.com/2011/03/great-little-warm-gift-trading-cards.html

And we have a copy of Great Little War Game for one lucky winner, all you need to do
1. Follow @whatsin4me
2. Retweet the message "Read reviewme.oz-apps.com, follow @whatsin4me and RT this msg. You might win a copy of @GLWG from @RubiconDevelop"
Gaming Giveaway iOS Mobile Review Software