The writing is everywhere with Air Display

If you are a follower of all things apple, you must have heard about the Air Printing, then the Air Play included in the new iOS SDK, these are cool things and air here signifies wireless. However do not think categorise this product as casual when you hear the name Air Display.

I can remember the times around 2005 when laptops were becoming a common feature with home users and 15" flat LCD panels were also getting common. I recollect seeing some creative individuals using their laptops connected to some public access machines and using the CRT monitors as a secondary monitor for entertainment while they worked on the laptop's main screen. I was lucky that soon, I got a chance to get myself two flat 19" monitors, it was the race of who could use multi-monitors. I also recollect a colleague that was a genius with unix and hardware configuration. He was driven with a challenge, to connect and configure hardware for use on a Linux box. He set up two monitors on a unix box (running Ubuntu 7.04) with dual display cards, one nVidia and one ATI. Later with SLI graphics, he could on to three monitors. The point of this was that it was a bit challenging to add multiple monitors on Linux and configure the display drivers, etc. Windows XP on the other hand made it easy to work with multiple monitors. Mac OSX was always the easiest to connect an external monitor. Microsoft started to support multi-monitors quite early but was not that easy, 98, Xp saw the use of multi-monitor and Vista brought in the fancy stuff, it would ask if you had multi-monitors on how you want them configured.

The pre-requisites for multiple monitor was to have graphics cards that had and supported multiple outputs, soon there were VGA and DVI display cables and displays. Microsoft had announced with the release of their Vista Operating System the ability to have Gadgets, hardware widgets that could be used to interface the O/S with these physical devices. I was most thrilled with a mini 4-7" display that could show me my emails. With this came the issue that machines did not have spare slots for additional display cards, and there were the USB displays (still not so common), offering a second or a third monitor without the hassles of all this hardware juggling, just plug in a new (USB) monitor and it would get recognised and work without any user intervention.

FastForward into the current times, iPhone and iPads are the most popular devices. People that still want the second or a third monitor and still do not want to clutter the desktops. They have a special place for the iPhones, iPads on their workplace and seat it almost as it were aprt of the larger setup. The good folks at Avatron took this into consideration and made available the drivers to use your iOS devices as an external monitor. To be able to extend your desktop to the iOS device, they have to be on the same wireless network. Which is in a way a security measure and provides you with a faster screen update. 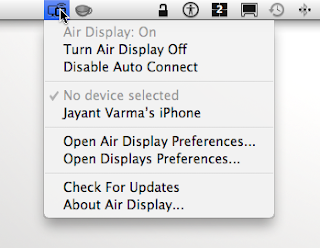 There are two components to this setup, the client (iOS device) and the server (the Desktop/Laptop). Run the desktop component from ( http://avatron.com/apps/air-display ) and you need to purchase the iOS component from the iTunes store from ( http://itunes.apple.com/app/air-display/id368158927?mt=8 ) for $9.99. And on starting the app on the desktop, you get an icon in the menubar (OS X) or the system tray (Windows 7/Vista) If you have your iOS device on the same network, it will show up in the menu and on selecting it, the software will auto negotiate and make your iOS device an external display. Rotate your device and the display auto-configures. Works best with a Mac, and passable with Windows. However Microsoft Gadgets (promised when Vista was released) never became mainstream and I longed to use my iPaq with windows as an external display, now this is reality with the iOS device extending the display. When a window is updated, the display of that window gets a bit blurry but soon gets crisp (compressed graphics to give you update speeds over wireless).

For those that want to have the thrill of a second monitor using their iOS device, great, head out and get this software, for those that feel what is the point of extending your screen on to an iOS device? I work on an iMac 27" with spaces so I have enough workspaces to work with, but sometimes I need to just look at the email and/or reference but not change spaces. Think of this as a secondary monitor on the mac. It will function as the third monitor, if you extend your iMac/Laptop with an external monitor using the display port. As a developer, you can run the console on the iOS device while testing your app in the simulator. The possibilities are endless if you suddenly had an external monitor. Not to forget that the iOS monitor is touch enabled and works fine too. So if you are developing a Mac App for a kiosk type application, you can also test it out with a touch based monitor. There are some wonderful user screenshots at the bottom of the page at ( http://avatron.com/apps/air-display ) to see configurations of how people use Air Display. I recollect meeting up with a developer that was working on an app to capture on screen sketches, with Air Display, the Mac is now equipped with a touch screen digitiser (for testing cannot provide the high quality of a digitiser ), without having to purchase a professional one to test.

And we have a copy of AirDisplay for one lucky winner, all you need to do

1. Follow @avatron 2. Retweet "Read reviewme.oz-apps.com, follow @whatsin4me, @avatron and RT this msg. You could win a copy of #AirDisplay"
or
head over to our Facebook page and like our page at http://www.facebook.com/pages/ReviewMe/137640632964588?v=wall and post a comment under the review that you want to win a copy of this software.
Developer Development Giveaway iOS Mac App Review Software Store Tool Windows