HomePod - Love and Hate it 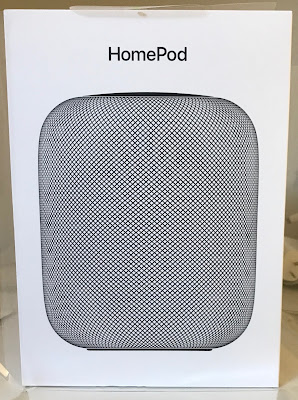 Apple released the HomePod and here's a first look and review. It is an expensive and an equally heavy device with an amazing sound. Let's look at it in detail.

The HomePod is the latest audio offering from Apple. In a very short and simple way, it is the Apple's expensive version of Google Home or Amazon's Alexa. Unlike the looks of an Air Freshner (Google Home), the Pringles can (Alexa), the HomePod looks like the smaller meshed version of the thrash can (Mac Pro) and weighs a solid 2.5 kilos so accidentally knocking it over would hardly be an issue.

The HomePod speaker has a rather long cable that connects to the mains. It would have been nice if the HomePod worked on a battery but given the power requirements to run the HomePod, it might be a bit difficult. The cable is quite long, about a meter long. This allows you to place the HomePod conveniently and accessible.

A HomePod is an Apple device and it requires you to have Apple devices to be able to do anything with a HomePod. Setting it up requires you to have an iOS Device running iOS 11.2.5. My phone is yet not upgraded to iOS 11, so it is practically useless in either setting up or using as a speaker. Luckily I could set it up on the iPad that was running the required version. The popup card to setup devices is the new UI feature from Apple similar to how the Airpods show up on the phones. Apple is now quite keen on setting up devices and settings by bringing a device in close proximity. Like the network settings in iOS 11. On setting up, the iCloud and iTunes settings are transferred over to the HomePod. At the end of the setup, Siri does a quick tutorial with a couple of things that you could do or rather ask Siri to do. The HomePod is named as per the location you choose while setting it up.

The specs on the Apple HomePod mention that it has Bluetooth 5.0 but it does not show up in the search for Bluetooth devices. So that eliminates most of the devices that are Non Apple. Since it is connected via the iCloud account, it will work only on your devices that are connected to the same iCloud account.
On the iMac (running Mac Sierra 10.12) simply change the sound source to the HomePod and now the HomePod acts like the wireless speaker.
Simply say "Hey Siri, play me some music" and Siri tunes into beats1 and starts playing the music.

If you have to setup the HomePod with another account or sell your device, return it or anything that might want you to remove your settings, it does not seem very simple or direct. However it is. Pull the plug, and while you plug it in again, keep the button in the middle pressed and don't let go. The while spinning circle turns red and Siri informs you to keep it pressed to reset your HomePod. Once it resets, you have to unplug it again and plug it back in. This is a little inconvenient and tiresome. Half the times the iPhone did not bring up the HomePod setup till I realised that you have to switch it off and then start it up again and authenticate yourself, only then it shows the popup. Plus you have to have the device in close proximity of the HomePod. Otherwise it drops out and you have to start again.

Trying to set it up with an iPhone 6S with iOS 11.2.5 it worked intermittently and it also failed the setup. It failed on the iPad too, it came close to the point where I was going to pack it up and take it back to the Apple Store.

So far, as of today 10th February 2018, the HomePod can don only what is mentioned above. It is locked into the Apple Ecosystem does not connect to other device via Bluetooth and definitely not via iCloud. While the introductory video for HomePod mentioned connecting multiple HomePods to function as a single unit, or use two HomePods for Stereo using one for the Left channel and one for the Right, both of these functionalities are still not available. All of that hinges on the next gen of Airplay called Airplay2 (WWDC17 Session 509), which is still not released in production. However some users have tried using the beta versions to connect and use the HomePod as required but haven't heard success stories so far.

If you are looking to connect the HomePod with the Apple TV, there are chances that unless you have the latest (4th Gen 4K Apple TV) you are out of luck, which kind of sucks that the new Apple TV released in 2015/16 which is what works for me as I don't want to move to a newer 4K TV as yet, my 65" HD TV is good enough given the lack of High Quality streams and Internet speeds. Once the NBN reaches everyone and all streams like NetFlix, etc are avaialble commonly in 4K, it might be worth the upgrade.

There are some interesting things that you can do with the HomePod, like use it as a conference machine instead of the Polycom devices in most offices. Make a call on the phone (running iOS 11.2.5 or higher) and then from the list of sources, select the HomePod and that will push the call on the HomePod. It has superior mic and speaker array to act as an excellent conferencing device.

Another thing you can do with it is set up alarms (which is not anything new) but helpful in comparison to the alarms on the device.

The HomePod is quite sensitive, whisper "Hey Siri" and say nothing, it lights up and responds with "Hmm hmm" which is quite creepy in the night.
When you are playing music which is quite loud, the HomePod can still hear your say Hey Siri, which is quite amazing, it kind of cancels the speaker sound and monitors what you are saying.

The only negative is it does not recognize the different voices and anyone can say Hey Siri to get it to respond. So if your family or colleagues try to prank you, you are at the mercy of Siri listening to everyone trying to ask it to do something. I was subjected to such a prank and all I had to do was keep tapping the middle button to cancel Siri. You can turn the Spoken Hey Siri entirely, but then it is not as much fun.

The HomePod is definitely like any Apple Device - Expensive and Amazing. However it would have been much better if it could be setup without using an iOS device and if it came with a free music subscription - after all Apple can afford to help push the sales of the HomePod. Like it did with the iWork suite which used to be a paid option and now is part of the free suite on the Mac and iOS.

I feel a bit uncomfortable with the HomePod connected to my account and Siri listening continuously.

Most of all, I would love to use it as a conferencing or talking to family together than on speaker phone. The problem with that is I don't have iOS 11.2.5 on my main phone so I cannot transfer from another phone or use other phones to transfer the call to the HomePod. It is a wonderful and amazing product but it just feels limited as soon as you start using it. Plus it's the first cut, so in 3-6 months there could be another hardware upgrade where this first generation HomePod would be outdated.

So there we are, any new Apple hardware is not cheap, but it is definitely an amazing product.