Is it Sparkling or Flat? Review of Bamboo Spark 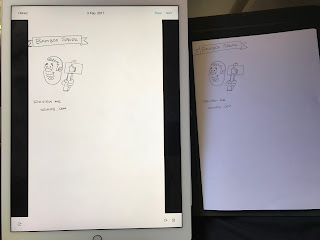 There is a strong possibility and a very high probability that you need to take notes in your day to day. It does not matter what field and what role you are in, the chances are that you need to jot down something. The converse is also true that practically each one of us carry a mobile phone, one capable of a lot more than a phone. It is a digital assistant with multi-faceted functionalities like a camera, phone, browser. Still for a very strange reason, very few use the smartphone for jotting notes. It just doesn't fit in the cognitive behavior pattern of note-taking. We call it a phone and we treat it as such. However, this review is about the Spark product from Bamboo. Which is a decent sized notepad with digital capabilities

The Bamboo Spark is a 25cmx20cm folio, which holds an A5 writing pad. Below this pad is the digitizer surface that works in conjunction to the digital pen. The on/of switch is quite smartly positioned at the bottom of the pad and the micro-USB charging slot on the top. The Switch at first seemed like a plastic port protector waiting to be pulled off.

The pen is slightly weighted at the top and tends to tilt over if you are habituated to rocking a pen between your fingers. The pen has a quite rugged feel and works quite fine. It comes with spare refills but I could not figure out how to open and replace the same or even batteries. The pen has to function on batteries of some kind would be the normal reaction, however it does not require batteries in the pen. The magic is via Electro-magnetic resonance. The kit that comes with the device includes a metallic ring, which is I believe the nib removal tool.

After being used to Apple products, the Microsoft Marketing options seemed in-excessive, similarly the Bamboo Spark comes in a couple of configurations which at first seems in-excessive. There are three offerings, namely

Each catering to the size of the companion device, the Gadget Pocket holds a smartphone, the Tablet sleeve holds a 8-10" tablet, Technically a 9.7" tablet. The snap-fit for AirPad2. After using my Spark with tablet sleeve model (without the tablet, as I could not possible fit my iPad Pro in that sleeve) my personal finding is that this is the best option, the pocket can be used to hold other stuff like business cards, folder documents. The sleeve is as big as one side of the folio itself. The flaps on the pocket is magnetic so it snaps close quite well.

Overall the construction and the feel of the unit is impressive and can look like a folio. In fact it could well replace a diary or other writing pads/folios one may carry.

The companion software is available on the app store for free, it's called Inkspace. After downloading the software, connecting the device to a smart phone or tablet is easy and painless slightly as easy as connecting the new Apple Magic Trackpad or the new Apple Magic Keyboard. The only difference is that this does not involve any cables. The software guides you to connect to the Spark and once connected, it keeps syncing the notes at a regular interval or when you press the button on the spark.

Start writing and the led near the sync button on the device glows between green and blue. The good parts of this are that you can draw where you want and you can use whatever paper you want. Writing or drawing is natural like you would with a real pen and since the pen uses real ink, you can see what you have done on the paper and at the touch of the button, it is transferred to the device. It even tracks the strokes and you could use the strokes to create a step-by-step process. One could see you draw or write and follow the same step by step.

However the only catch is that while it handles 1024 levels of pressure, I personally did not find it a very good tool for sketching where you would draw several strokes atop each to create a drawing, many of the lighter strokes are not captured. This is handy for inking and then transferring the same to a computer to color. It is handy for students and executives alike to take notes in classes or meetings. Again, it works fins if you use print, however it kind of falters on running or cursive writing. It does not have a lag, however you need to write slowly to have the best results, which could be an issue at times while taking notes.

Over the past 20 odd years I have tried several options, starting from the DaVinci PDA, Palm Pilot, Sharp Zarus and the iPaq. These were good however a 320x240 screen in a 3-4" factor did not offer a lot of resolution. To give you an ides, (at least in Australia) when you get a parcel, you sign on a device for receipt, these are the industrial versions (bulky and thick) of these early devices and you know that your signature using that flimsy plastic stub is quite non-responsive. Then about 10 years ago I tried the Livescribe Pulse pens, I loved it and I believe I could have made a living if I count the number of people I influenced and convinced to buy it. It was amazing, but for two major issues; It required special paper, so if you forgot or ran out of paper, tough luck. The other was the pens were not very hardy, not the construction, but the technology. The LCD panel would darken and die, the pens would also stop responding and the support from Livescribe was good but unhelpful. A replacement pen was an uphill struggle and when it arrived, it was a used pen in a bad condition and died within a couple of weeks. Add to these the cost of the base pen and stationery, it was an expensive option.
However your notes were quite organized as each notebook and page was identifiable. The added advantage was that if you could not get all of the details during the meeting, you could associate an audio recording to the point where you are. You could later go to that page and play back portions from any line on any page by simply tapping the pen on that spot. The real party trick with the pen was the draw your own piano and translation tools. You could draw a piano and simply tap at the keys and it would play the corresponding note. You could write a work in a couple of languages and it could translate it for you in English and read it aloud.

The price point for the Spark is quite affordable and if it does not work for you, it still serves as a rather expensive folio pad as against other devices that are unusable entirely. Having said that, it is useful and usable. The only little problem is that your paper has to be in the space where the digitizer is. While visually you can rotate paper and start drawing from a visual connection point, if you move the paper, your points can be offset by that movement. Thereby using a A5 notepad would be recommended. It is also advised by Bamboo to use a pad with 10-15 sheets and a not so thick backing sheet to the notepad.

Bamboo also have variant of the device and they are available as
* Bamboo Slate
* Bamboo Folio
both of which come in A5 (small) and A4(large) format, the Slate is just the back without a folding cover, where as the folio is similar to the Spark with a folding cover. These seem to be the next version models from the Spark as the pen is no longer aluminum but dark grey/black.

In summary, the Bamboo spark is quite useful if you have the habit of writing in a notepad or a notebook. I have tried note taking on a tablet (review in a separate post) which has not worked at least for me. This is a recommended option as it does not have a lot of external dependencies. The only risk is running out of battery on the digitizer (you can charge using the powerbanks via Micro USB port) or running out of ink on the pen (which should still work but you would be unable to see the notes on paper).


Note: Bamboo did not supply us with a test unit device or software of any kind nor did they pay us for this review.