Fast as Lightning, USB-C or Thunderbolt 3

on January 21, 2017
Amongst all of the discussion about the new MacBookPro with the touchBar, it is like most of Apple technologies, you do not want it but then you get used to it and soon cannot live without it. When the first ipad was released, I did not want it but soon I found that I had the iPad 1, the Keyboard Dock and the Apple iPad Case. However, one thing that I was always aware of when I purchased an Apple Mac, that it was the best hardware available that that time.
When I got broken into and the cretin stole my MacBookPro, iPad Pro and a couple of phones amongst other things, I had to buy replacements. The question I was faced with was should I get the new MacBookPro with USB-C or a new iMac or an older MacBookPro with USB-A? I had decided and prepared myself to get a 15" MacBookpro however Apple stores were out of all MacBookPro, be it 13" or 15" and what was available was only the older 13" 128GB. So a trip to JB Hi-Fi next to the Apple Store secured me a Space Grey 13" MacBookPro with 256 GB (the only ones available at JB that evening). The next week, My office offered me the opportunity to buy the iMac 5K that I was using at work so I got an upgrade to my MBP and the iMac.

While for the past year I had moved to Melbourne ahead of shifting completely lot stock and barrel, I did not have my entire setup with me. This included a juiced up iMac 27" with boosted RAM, however the bottleneck was always the HDD and replacing a HDD in an iMac is a cringe worthy task. So with the new setup, I wanted to install my VM's and setup my development environments. Including Windows 10 running Visual Studio and Unix Ubuntu 16.0. The first issue that raised its head was Parallels - The OS running was 10.12 Sierra and to run Parallels you need the latest update of version 12. Luckily or proactively I had taken advantage of an earlier offer to upgrade that included 1-password (1 year subscription) and some other stuff that was not really very useful. I was using VMFusion earier but if I have to upgrade every year and with every new OS that Apple releases, I am force to upgrade or bail out, I chose to continue with Parallels. Though there are some good free VM options (look for another article detailing those).

I wanted to use an external drive and keep the VM's separate, so I chose to use the Samsung T3 SSD 500GB external drive. While I was wanting to use a 250 GB SSD drives, one each for an OS, but wasn't sure of how well they will perform. I had been looking for some good deals on the 250 GB drives for a while but when I was at Harvey Norman getting my wife a new HP Envy Laptop, the salesman made a very interesting offer and bundled the 500GB drive, so that was it, got a 500GB drive instead of the 250 I was contemplating. While I was trying to google reading others opinions on the T3 drives, the common consensus was it is FAST, my point was how fast is FAST? Having over a dozen external USB drives I have waited hours for file transfers while the boxes claimed fast, USB3 interface, etc.

Even with spinning 7200 rpm HDD on the 5K iMac 27", a Mid-2015 model is perhaps the slowest of them all iMac 27". Despite that, the experience on the iMac is a fair one, not one that I would complain about. Since Apple have started to make the RAM and the HDD non-serviceable, the question that remains to be asked is what advantage does that bring to the table? So this set out as a small experiment to test the speed of the drives and see if I can get an external drive that is good enought to boot from and not struggle with slow speeds. After all we are so used to instant on devices with our Phones and tablets. So why should we suffer the boot times and spinning indicators on the desktops or laptops.

For the purpose of this test, I chose the freely available app on Mac App Store called "BlackMagic Speed Test". Running this on the iMac yielded speeds of 111.8 MB/s Write and 168.2 MB/s read speeds. This is for a 7200 RPM 1TB drive on a SATA/SATA Express bus. This set the baseline, that if you can have read/write speeds around this mark then you can run a VM without an issue. Another thing to note is that the external drives would connect on USB or Thunderbolt-2 (iMac Mid 2015) worse if you connect drives to USB ports or connectors that are USB2 or *shudder* USB1. Surprisingly while you do not think of it, there are plenty of these around, for example due to the design of the iMac, I have an extension cable (the one that comes with the Apple wired Keyboard) and the two ports on either side of the keyboard. While the T3 is a fast drive, it's speed and performance varies depending on the post where it is connected. Connecting it via the extension cable that came from Apple with the wired Keyboard yielded results of 37.7 MB/s Write and 41.1 MB/s Read. Now removing that cable and plugging the drive directly to the back of the iMac yielded speeds of 367.9 MB/s Write and 421.9 MB/s Read. Which is what Samsung promised on the box via the USB 3.x interface. Now plugging in a Seagate 2TB USB 3.0 Backup Slim external HDD directly to the back of the iMac resulted in 113.7 MB/s Write and 116.3 MB/s Read approximately similar to the on-board HDD. Adding another Toshiba External USB 3.0 drive provided speeds of ~20/31 which was unexpected since both were 2TB drives and on USB 3.0 interface. 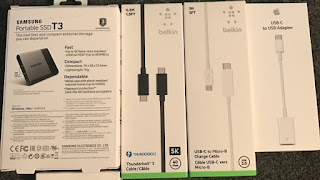 So the curiosity got the better as to what would be the speeds on the MacBookPro? What kind of speeds would that offer given that it has a much faster USB-C/Thunderbolt 3 bus. The first issue was the ports are all USB-C and to connect most of these USB2/USB3 devices you need a USB-A port. Like all that purchased the new MacBookPro, I ended up with a host of cables. Strangely when I think of it, I might have purchased a high end laptop worth of cables and external drives so far in the past couple of years and the life span of those cables are exactly a couple of years only (Leave that story for another article). I purchased an Apple USB-C to USB-A cable and a Targus 4Port Hub with 3xUSB-A and 1xUSB-C port. First connected the Samsung T3 to a USB port on the Targus USB port, this resulted in 389/411 speeds. Then connecting it via the Apple USB-C to USB-A cable, it yielded speeds of 384/421 and then via the Belkin Thunderbolt 3 (USB-C to USB-C) cable which resulted in speeds of 386/420. Now I tried the Apple USB-C cable that they provide with the MacBookPro for charging, this was the point of discussion by many users, any guesses at the speeds? Connecting the Samsung T3 SDD drive using the apple charging cable USB-C to USB-C resulted in speeds of 36/40 MB/s.

This was the most appaling of them all, Apple should at least provide a cable that can be used as an alternative if you ever forget taking an adaptor along. Finally, the question was what is the speed of the on-board SSD that apple has on the MacBookPro? So running the same app on the local drive of a MacBookPro 13" 256GB yielded results as 1247.6/2000 MB/s. This is nearly 4-5x faster than the external Samsung T3 SSD which is so far the fastest external drive available on USB (that I have come across).

Summary of Speeds and Devices 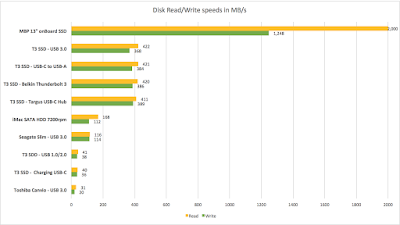 Older External drives were not usable as bootable devices and therefore most bootable external drives were usually thunderbolt. The baseline of acceptable drive speed could be considered as a drive that has a read/write speed above 110 MB/s which is what a 7200 rpm drive on the iMac offers. The second factor is the interface, you can have the fastest drive but connected to a slow interface will only offer you the maximum speed that the interface offers. It is a no-brainer; if you are driving a Ferrari in a traffic jam, the Ferrari despite the best speeds can only be driven at speeds of 10-20 kmph.

The Samsung T3 SSD are an amazing line of SSD drives worth if you want a fast external drive on the USB interface. Since the drive has a USB-C interface and has a USB-C to USB-A Cable you can connect it to other devices with that do not have a USB-C port. Since the interface on the drive is a USB 3.1, it can offer a maximum speed of 5Gb/s therefore using a thunderbolt 3 cable did not increase the speed any further. Thunderbolt 3 also uses the same USB-C form factor for its ports but offers speeds upto 40 Gb/s. Though USB 3.1 can offer speeds upto 10Gb/s, USB 3.1 Gen 1 which is available on the T3 supports only 5Gb/s.

Disclaimer: Generally we get software provided to us by the developers or manufacturer when reviewed, for the purpose of this article none of the hardware or software was provided by any manufacturer or developer and nor did we receive any financial incentive to write this article/review.