Grappling with drawing charts - Omni Graffle to the rescue 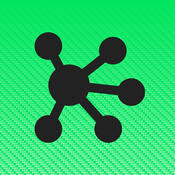 Do you create / develop software? There comes a point when you end up trying to create diagrams to illustrate the architecture of your solution, or you could be a designer creating a wireframe to illustrate the layout and the elements. You could be from an entirely non-IT field like architecture or public service where you want to create plans of houses, interiors, pavement assets, maps, etc. If you were using a Windows machine, you had the options of using Visio. If you are using a Mac, there is no Microsoft Visio.

This is where Omni Graffle steps in and provides the options for Mac users. I was first introduced to Omni Graffle in 2007 and have seen the updates adding features from the Pro version 4 to 5 and then to a paid upgrade to 6. This was on the desktop, however Omni created the application for the iOS and as it currently stands, it runs on both the iPhones and the iPads. 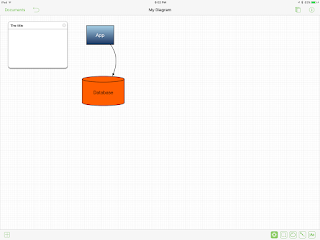 We got a promo code for Omni Graffle iOS version and have reviewed it is running it on an iPad Pro and iPhone 6+. While the iPhone or the iPad (2, Air, Air2) versions do allow you to work with Omni Graffle, there is an added dimension or an experience trying to use the iOS version on iPad Pro. It has a larger screen resolution of 2732 x 2048, much larger than that on a MacBook Pro 15" which is just 2880 x 1800.
So an iPad Pro can make more sense as a desktop replacement. Add to this the Apple Pencil, that is an added dimension to the user experience as compared to a finger touch interface and a Keyboard completes it as a Desktop Replacement. However, the question remains, can the softwares provide a similar or better experience? 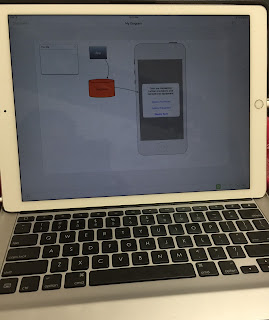 There are a lot of new users to a Mac and it is possible that many are unaware of what is Omni Graffle. Unlike many other software, the iOS version of Omni Graffle is not a helper or a sidekick application, it is a fully featured application with all the functionality (that can be duplicated on an iOS application) from the Desktop version.

The first and foremost functionality in Omni Graffle is the ability to draw basic (primitive) shapes like rectangles, circles and lines. This is expected from any charting software, however from the many other softwares that I have used over the years on Windows and Macs, Omni Graffle manages that quite intuitively. When you resize or move the shapes, it displays smart guides to show co-relations like matching widths, heights or even mid-points. Then there are the options to set the fills, strokes and shadow, geometry on the shapes. Surprisingly, though it sounds like somethings that should be expected from an app from this genre, you would be astonished to find that many others do not manage this well.

The way each person uses any app depends on the day to day activities that one is involved in. In my case I started with Omni Graffle for creating diagrams, designing the architecture of our Software Projects. This went on as the software to create high resolution diagrams for Presentations, Books, etc. In fact many of the diagrams to explain concepts, etc (other than screenshots) were created using Omni Graffle (desktop version).

Getting started with using Omni Graffle is quite easy. Add to that the simplified interface with just a couple of icons that make up the UI giving you maximum space to work with and create diagrams. The UI is split into three sections, Canvas, Stencils and the Items.
The Canvas inspector displays canvases and layers, the items or groups added to the canvas/layer and the styles.
The Stencils display the stencils already added to the system and also provide the functionality to add new stencils from the online repository (StencilTown)
The items popup bar has 5 items,
the first allows for selecting items.
The Shape tool allows adding shapes to the drawing
The Freehand shape tool allows you to draw the shapes on the canvas, the coolest part is if you have shape recognition set to on, then the hand drawn shapes are converted to vector equivalents of the squares, rectangles, triangles and circles.
The Line tool allows you to create lines on the canvases. You can add/delete points on the line. While on the desktop version you can easily change the lines from straight to curved, on the iOS version you can easily change the settings using the info button, which provides context specific details. From here you can change the line type, line start and ends to add arrow heads or circles, change the stroke, shadow, line color, geometry and connections.
The Text tool allows you to add text on the canvas. You can also add a shape to the text and wrap to the shape apart from customizing all of the other parameters, like fill, stroke, shadow, etc.

The advantage of a touch enabled device over the desktop version is being able to do many of the tasks easily than achieving the same via a series of clicks. The standard gestures are almost intuitive that allow you to tap and select objects, pan the canvas, pinch and zoom to zoom the canvas.
You can quickly rotate the shapes by selecting and holding it with two fingers, the rotation angle shows up and you can then simply rotate the shape to the angle you want.

I chanced across the manuals under the support section that has a very detailed description listing all of the gestures.
This can be found here (https://support.omnigroup.com/documentation/omnigraffle/ios/2.5/en/)

While this might sound a bit odd given that desktops have keyboard shortcuts and tablets generally have touches and gestures alone. With iOS 9, apple added the ability to have keyboard shortcuts with Bluetooth Keyboards. If you are looking at an iPad Pro, you have to have a Keyboard and an Apple Pencil. (It is nearly similar as working on the desktop version if you have had any experience with the desktop version)

You can synchronize your diagrams with the Omni Presence server to have them available across your devices (though connecting and synchronizing on the Desktop was not an issue but listing the .graffle documents on the iOS devices was).
The reason was the fact that I tried to add the OmniPresence account via the WebDAV servers, however adding it from the Locations screen worked smoothly. All documents from the Omni Sync Server allows you to save your changes back to the server by simply clicking on the sync icon.

You can also add other online sources like iCloud, OneDrive, GoogleDrive, Box, etc to get (import) diagrams from. 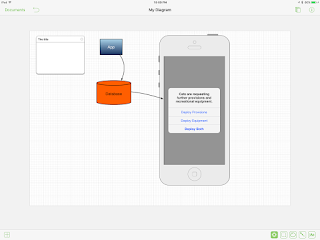 While you can create complex shapes by adding other shapes and reuse them, it might not be something that everyone can do. For those there are stencils, a collection of shapes like Maps of countries, counties or simply elements used on maps. In fact there is a site from where you can download stencils and use them in your drawings.
StencilTown (https://stenciltown.omnigroup.com/)
Graffletopia (https://www.graffletopia.com/)

As a user of the desktop version running Omni Graffle on the MacBook (13" white polycarbonate) and then the MacBookPro (15" Aluminium) and then the iMac (27" both pre-retina and the 5K retina), there is an expectation of familiarity. A familiarity with the floating palettes, the icons toolbar etc, however the iOS version be it on the larger iPhone 6+ or the iPad Pro does not disappoint. The canvas bar can be pinned to the left where as the context inspector is a popup. If this could also be pinned like the Xcode bars on both the sides, it would make for a great experience.

Creating or editing drawings on the iPad pro is easy and quite handy (no puns intended given that it works better with touch). As mentioned earlier, you can quickly draw shapes on the screen to automatically create basic shapes.

Specifically, when running Omni Graffle on the iPad Pro it is an experience that is as good as the Desktop experience.
It is a must have software on your springboard for times when you want to quickly draw up a new screen or add a new class diagram for your development team all while you are on a plane or a train. 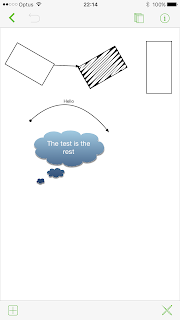 Pro features were not accessible to review