on October 29, 2014
There are already a lot of first impressions that one can read on the new iPhone and iPhone6+ online. Since the new iPhones have been released, I too have had the chance to see them first hand, but not really up close and personal to write about it. My contract was up for renewal and due to the worldwide shortage (the fact that Apple could not supply as many handsets as people purchased) They had not expected all of the handsets to have sold out immediately.
To be honest and to be fair, I went to see if I needed an iPhone6 or a 6+. The closest shop to the elevator I took was JB-HiFi (http://jbhifi.com.au/) and on display were the two iPhone 6 along with an iPhone 5S next to it. The first impressions of size were pretty evident. However that was of little concern as I needed to upgrade and get a new phone and the difference between getting a 5S and a 6 was about $3 a month extra (on my telco plan). So putting them all in landscape, I played the same movie on all of them (they had the Lego movie installed on it) and stepping back I could see that the iPhone6 was a true winner for entertainment.

So to have a think, while I went shopping to the other stores, I was thinking about the same. The maximum on a 5S is 64GB, I already have an iPhone 5 64GB (though the 5S is nearly twice as fast and powerful and has the touch ID) I have to either get a 6 or stay with my 5. The other issue is that I am still running 6.0 on my iPhone 5 and am quite happy with that. I did not like and did not upgrade to iOS 7 (other than on my iPad2 which barely manages to work with iOS7) So 6 it definitely is and it would also help to test my apps and also help with testing and coding for clients and for the book I am currently authoring on Xcode and Swift.

So I made up my mind and went to the Telco shop with whom I have a contract, and they were all out of iPhone 6 128 GB models. I went to an alternative shop and there they had the 128GB but I had to wait for my telco contract than change. The short of the long story is that everyone ran out of stocks and from the start of this month till date, the telcos are struggling to fulfill orders. I am lucky to have gotten my phone today and after setting, updating, I have this to share. 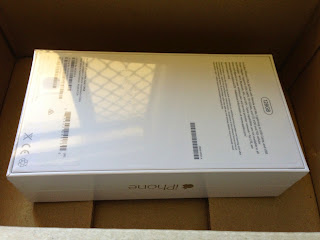 The first thing to do was to backup my iPhone 5 and then restore this phone from that backup. Since the apps are on the other phone and iPad, the iPhone 5 was quite light and empty so the backup finished rather fast and so did the restore. Only to find that the apps were not all installed. This could have been due to a couple of reasons, one being that I had cleaned up the iTunes directory and removed all of the apps to an external drive to make space on the main HDD. I faced some issues with iCloud namely because I could not remember the password and in earlier versions I could simply delete the account, now it is called Sign Off and you have to have the password to sign off from Find my Phone, etc services. Even after resetting the password, I could not get that to work, I could log-in on the mac but not on the iPhone.

Then the next hurdle was installing some of the apps and ensuring that the data was there from the restore. That went smooth though I had to dig up the passwords for the emails and set them up as the account were restored but not the password information. Since I have about 7-8 email accounts setup it is not easy remembering the passwords, add to that the issues that Google had made it difficult to even use them while I was away and everytime I reached an airport and checked my email, google thought it was suspicious and blocked access until I reset the password. It came to a stage where I had no idea on what the passwords were as I could not use an earlier used password and could not continue to use it unless I changed the password.

After all of the setup out of the way, it came back to the basic comparisons, the sizes and orientations. The iPhone 6 is nearly as big as the screen on the iPhone 6+, and the entire iPhone 5 fits in to the screen of the iPhone 6+ like a widescreen (35mm movie; if you know what that is. with black bars on the top and bottom).

Handling the iPhone 6+ is not a very plesant experience, specially since I have normal sized hands. I am sure that for those with larger hands, this fits right. The width of the iPhone 6 and the iphone 5 are more or less similar and hence for normal average hands, it fits right in. Everytime I had to handle the phone it felt as if I might just drop it. Carrying it around felt like carrying the iPad, but as it it was folded into half. In fact the Samsung Tab 2, albeit a little smaller but it visually felt as if it has the same dimensions. Handling the iPhone 5 again felt like holding a toy and it felt so convenient. Note the Australian 50 cent coin at the bottom left corner.

On the software front, I tried to run a couple of apps including the ones made by me. The interesting thing to note is that despite it having a HD screen resolution of 1920x1080, the apps that work on the iPhone4 or iPhoone 5 resolutions adapt well and the difference is like watching a movie on a 60" Television after watching it on a 30". Some of my apps that were created with dependencies on iOS 3.x run perfectly fine and scale well too. I also found that two of the apps crash but that is because they relied on playing an embedded resource sound file, since that does not exist, it is nil and hence it fails and crashes. But till that point, it scales and works quite well. Some of the other apps created with other frameworks using Lua.

Holding the iPhone 6+ to my ear was a bit uncomfortable given the size.

Other features like touch ID, reachability worked fine so did Air Drop. The features that interacted with the desktop did not work as my macs did not support Bluetooth 4.0 LTE. So that would remain to be tested sometime in the future.

When I had the iPhone 3, my first iPhone (after having the iPod Touch - Macy Gray version) the iPhone3 was an amazing device and most of all, it would connect on the WiFi which was not possible with the iPod Touch. While the Windows Mobile devices like the iPaq, etc would easily connect onto the wifi network. From the iPhone 3 to the iPhone 4 (I did not get the 3G as contacts are 24 months) The iPhone 4 was amazing and before they were released in the Australian markets, I had seen one with a person that purchased one outright from the UK and the other with an Apple employee at the AUC conference. The retina display was something to be excited about. From the iPhone 4 to 5 (again I did not get the 4S due to the 24 month contract) The iPhone 5 was slightly larger which was not much of an advantage over the previous screen size, I mean the additional pixels can display an iAd or a notification, nothing more. It was slightly longer but since the width was the same, it was ok.

It has been just one day with the phone so it would be too early to comment on how it feels. And carrying it around would literally require a man purse as it would not fit in any jeans pockets. Keep a look out for another detailed article after a couple of days having tested it further.
Development iOS iPhone Mac OSX Preview Review System Thoughts