It would be all right to say that Supercell is the new Zynga, they have already proven their mettle with Hay Day, then got users fighting with Clash of the clans and now with their third offering they are poised to take the war further with Boom Beach.

Boom Beach is an iOS only app in beta, which means it is still being tested for issues with real live users. It is available on the Canadian and the Australian app stores (if it is now available on other stores, please let us know). So what is it about Boom Beach that would make it any different to the previous offering Clash of the Clans?

With Boom Beach, you are now controlling an island with lots of Mangrove trees (unlike a square clearing in the woods with Clash). The game is no longer 2.5D sprites but are true 3D models and the game itself is 3D.

Since the theme in Boom Beach is modern warfare, the troops are not barbarians or Archers, but Riflemen and Heavy (from Team Fortress) The best part is that if the troops survive the battle, you get them back with full health for the next battle, i you lose them as casualties, then you will have to recruit (build) the required troops. 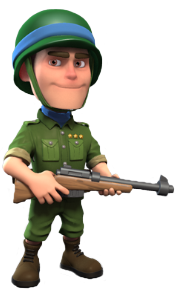 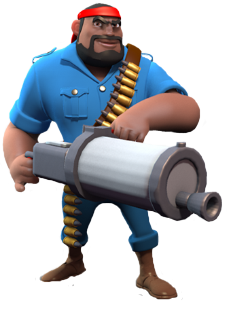 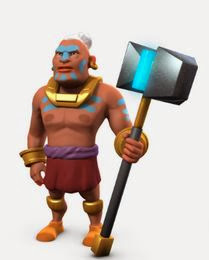 The resources are no longer simply Gold and Elixir or Dark Elixir, but Gold and Wood. As you progress (advance in levels) you get Stone, Iron, etc. You can also use 600 gold to cut down a tree and get 300 wood (nice conversion though, and there are only finite trees) so once you have chopped them all off, you have a clearing but no more trees. There are old mangroves and ancient mangroves along with some stones and boulders on the island. To remove these you need a high level headquarter (mainly level 6+ and above)

The way to attack another island is with troops, and the key word here is ISLAND. So to transport the troops, you need carriers called a Landing Craft. When you start the game, the tutorial forces you to build two landing ships and a gunboat. The gunboat can deploy long range artillery while the landing craft transports the troops to the single landing point on the island. The Radar helps you to explore more of the island (on the map) 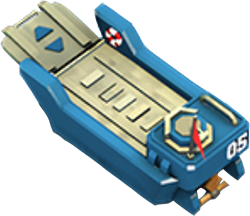 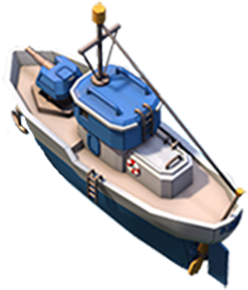 You are in control of an island, there is the combat map that has other islands on it, when you start they are occupied by enemy troops and as your advance, they are lurking with mercenaries aka other online players. These can attack your island and steal your resources, as you can theirs (later as you see islands with mercenaries) When you free an island of their occupation by the enemy forces, (in a way they are called free, but you own those islands now, strange definition of free) you get the gold mined on those island at approximately 40 gold per hour, per island freed (or enslaved, as per your point of view). 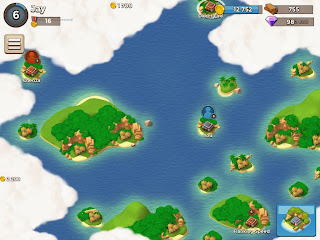 It is fun when you start off, like Clash, but then when the times get into hours and days, it does get a bit slow. This can be sped up by using diamonds (the equivalent of Gems in Clash, or Doghnuts in Simpsons) You can find diamonds in chests on the islands (at random). However I found this to be a bit of a drag, where upgrading the launch craft increases the capacity by only one unit and utilizes about 3000+ wood to get to 6+1 and about 45 minutes.

The heavy is an interesting unit and it is the equivalent of 4 units or rather uses up 4 units worth of space, so in a launching craft, you can either have 5 troops or 1 heavy with a spot free and unusable. All the islands on level 1 can be freed with a heavy and 5/6 troops (you might lose them on some maps, but you will have to rebuild) Some level 2 islands can also be cleared using 1 heavy and 5/6 troops if played strategically.

The troops in Boom Beach are not dumb units like in Clash, in Boom Beach, you can (with level 3 HQ) use flares and direct troops to attack a particular building rather than follow their own dumb AI, which could get them killed, score low, get fewer resources, etc.

My gripes with the game and gameplay, 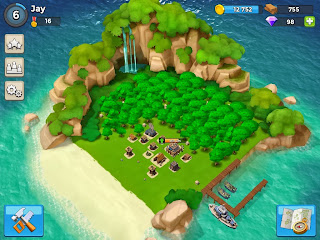 1. I leveled up to Level 2 Radar to be able to explore the island for more spaces, I get raided by another player. This is not trivial as it may sound. As explained above, I could manage to upgrade the landing crafts from 5 unit capacity to 6 units each, so one housed 6 riflemen and the other a heavy with 2 slots free, upgrading that from 6 to 8 is a long and expensive task (requires lots of wood, etc) I got raided with a user that had 3 landing crafts, which means that the user was HQ level 6+ (I was just 2/3). The landing crafts each had 4 heavies, i.e capacity of 16 units each. Imagine, upgrading a landing craft from 6 to 7 requires 3,200 wood and 45 minutes, how many resources and time it would require to reach unit capacity 16. So the matchmaking is flawed and unfair, what's the motivation to continue?

Note: The time and resources required for upgrading the Landing craft is as follows (Source: Boombeach wiki)


2. There is only 1 builder, in Clash you had two builder huts to start with and could get a third if you won 1250 points in multiplayer (as you would get 450 gems and 500 are required for a new builder hut) So everytime you want to upgrade, you are stuck, it is a serial upgrade not parallel.

3. Based on the resource, the units and building show a green upgrade arrow, indicating that these can be upgraded. Well, this is not a gripe but it does not help when you are waiting for more resources to upgrade other priority buildings.

4. iOS7 only - While I could install Clash and play even on the iPad1 running iOS 4.3+, Boom beach's insistance of iOS7 only restricts the devices one can play on. I know it may sound crazy, but I have Clash on the iPad1 (4.3), iPhone4 (6.x), iPhone5 (6.x), iPad2 (7.x), of which the iPad2 and the iPhone5 have the same clan due to Game center. The others did not have game center activated, so I have three clans advancing and warring. However the inability to move the game from a device to another and back is quite restrictive. In this regard, the Simpsons is quite nicely implemented. I can create multiple springfields and log-in, out and visit my main town or visit the dummy towns all on the same single device. It is also useful where while I was away, my main device was on roaming so I did not dare use its data plan, and on the iPhone4, I got a local sim card with data, so I could update my town even when I was away from the WiFi. On reaching back here, the iPhone4 became the WiFi device with the iPhone5 that could work anywhere even outside of the WiFi. This cannot be achieved with Clash or Boom Beach (supercell)

While there are issues, the game does kind of get addictive. The times it takes for upgrades and the resources it demands keeps things slow, but when you look at the leader boards and people on level 53 and you are on 5, it is a bit frustrating and even more when these players flatten your base that has a single unit of defence (as you need to level up to be able to get more).

Definitely a game that you must have a look at and give it a go.
FREE Gaming Review