on September 26, 2013
We are all excited about the Mobile platform, but still the Desktop remains a large market and there exists a large market for this area. The thing to note is that many desktop apps are not about fully functional enterprise applications but can be simpler utilities that could assist in automated interactive presentations, thereby seeming like an app but for the Desktops.
In the past, yes it is the past now, Visual Basic was the best and the easiest way to quickly make an application for windows, it had an IDE and all one needed to do was drag drop the components, set the properties and write a little script (if required) and voila, an App. Yes there was a lot of apps that were best if they were not written, but VB brought development to the masses more than many other applications at the time, strangely Microsoft killed its largest used product, one that was active and in-use for a vision of the future, the DotNet platform which also perhaps was the cause of a lot of developers looking at alternatives and thereby migrating to the Apple platform (apart from Apple's timely introduction of the Intel motherboards instead of their PowerPC).

Amongst developmental languages, there were plenty, while C and Pascal were used for teaching students of Computer Science, Java was the nonchalant frivolous language and C++ the serious bad boy that could do a lot but was scary. Developers started to look at scripting languages to make things easier, JavaScript caught on soon while Microsoft's VBS Push with DHTML did not last long, this left a gap and heralded new kids like Python, Ruby and Lua, though Lua was not the kid in the front of the class like Python and Ruby. Over some time, Lua has gained it's footing and has established itself as one of the easiest scripting languages to work with and one of the easiest to embed and one that has a small footprint compared to the others.

IndigoRose brings to the Windows desktop, an IDE that allows the non programmer create an interactive multimedia presentation, NO this is not a contender for the Death by bullet points (PowerPoint type) The result is a standalone application (exe) that can be run by double clicking or even included in the Autorun.inf file (using the autorun feature of Windows where the program is started automatically when a removable media is connected/inserted into the computer). It offers a simple drag-drop interface to create an executable that includes plug-ins which in turn allow/extend the functionality of the autorun stub to do more. Autoplay Mesia Studio has it's own scripting language and integrates Lua, so if you are a Lua developer, you can simply require your libraries and use them with Autoplay.

On starting up Autoplay Media Studio, one is presented with a Wizard to either create a new project, open an existing project or restore the last project. It comes with about 16 templates to choose from (if you select a new Project) 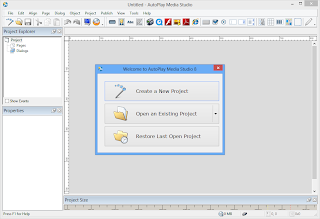 The templates are fully functional and can be extended/tweaked to add the desired functionality. The toolbar above offers the components that can be added to the project, these include common controls that make the UI like Buttons, Checkboxes, Radio Buttons, ComboBoxes, Listboxes, etc and also Images, Video, PDF, Flash, etc (what one would call ActiveX or embeddable objects). Each of the object can have properties, that define where it is on the page and other properties/attributes like color, font, visibility, etc. The project can be previewed at any time by simply pressing the F5 or selecting the preview option from the menu. 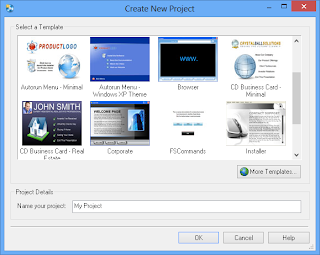 As a non developer, one can easily place the elements off any drawing application to make a pretty UI and then associate actions/scripts with each of the elements. The scripting option still does not require one to be a developer, there are actions and scripts pre-created, these can be used to associate or carry out actions like opening a PDF or printing it, sending an Email or even starting a browser session and viewing a URL. Multiple actions can be queued up in a single script. For the users that are well versed with scripting would love the fact that the scripting is Lua based, the actions that are created are Lua commands and it even has something called quick scripts, this creates Lua snips that for the most commonly used Lua commands like concatenating two strings, loops, creating tables, variable assignments, etc. 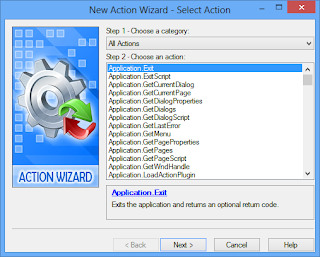 The good thing about the build in actions/script snippets (nearly 900 of them) is that one could easily add snips to read/write data from files on the drive, display dialog boxes, request information, prompt the user to select folders and/or files. All while abstracting the user from the Operating system nuances and structures, pointers and callbacks. 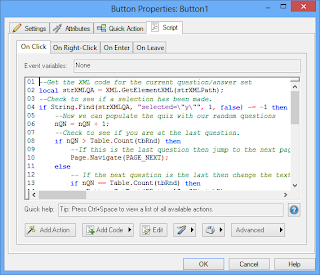 Creating a project is fine and many experimental development apps/frameworks allow for amusing times, but when it comes to delivery mechanism, they fall short, not Autoplay, it has a well integrated delivery system that allows for delivery mechanism using several options, the resulting exe can be distributed via Burning onto a CD/DVD or a BlueRay, with Autorun on a drive, as a compressed file to distribute over the Web/eMail or as an ISO file that can also be used for mass production.

The resulting applications contains all of the required DLL's and the Lua environment in the form a DLL, lua51.dll and lua5.1.dll, autorun.inf file and the directory that contains all of the resources neatly placed in folders called Audio, Images, Icons and Plugins. The autorun.cdd which is a zip file contains the relevant project details and the fonts as required. This is a completely independent applications that should work on the a new stock windows box.

Before anyone jumps at what is it not available for the Mac or Is it available for the Mac, No it is not as yet and the chances are that it might not be in the immediate near future. However creating something like that is not so difficult, the challenging task is the IDE and the mac equivalent of ActiveX technology to allow integration, however since Apple Script can talk to majority of the applications and components on a Mac, this should not really be an issue, the point would still be consistency.

In very few words, it is a must have tool to quickly make small utilities to deliver information and/or multimedia experience.

If you are new to Lua and scripting, Autoplay Media Studio's snippets are good enough to help you learn and understand Lua, add to that the detailed help files, if you are still looking for a book on Lua, there is Learn Lua for iOS Game Development written ( http://www.amazon.com/exec/obidos/ASIN/1430246626/ref=nosim/apre-20).