Cool and fun.. a double deal

on December 06, 2012
While Christmas is snow and cold weather for most Americans, South Americans and Australians sweat it out for Christmas, it is still a season of joy and cheer. For the holidays and that time to relax, there is a double offering from Sauce Digital that we are looking at today. 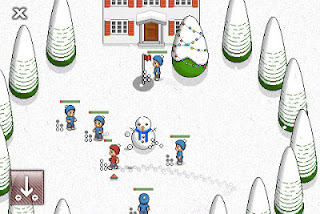 The first one is called Snow Fight and it is free. It is a lovely involving game that looks fun, feels fun and entertains. It is a non-shoot 'em up type game involving snowballing your opponent. It hinges on a lot of strategy, you can use the rocks and plants to save yourself from the snowball attacks. Each hit that you take, your health decreases by a bit, when you are out of health, you just lie down on the snow, let's say Dizzy, head hurting from being hit by many snowballs. it is a non-violent game, the only violence is snowballing your opponent. You have 5 snowballs with you at a time and everytime you run out of snowballs, you can collect more by pressing the on-screen down arrow which allows you to refill. The pixels graphics look amazing.

The game has three sections with the first, Yellow Zone with 6 scenarios and then the Blue and Yellow zones with about 20 scenarios each. The strategy with this game is simple, keep moving, whilst stationary, you are a target, while moving you can avoid getting hit.

The game draws from capture the flag and (capture the Snowman). You can get a Gold Medal for completing the level perfectly (by getting all of the snowmen and the flags) however you get a better score if you can avoid getting hit by a snowball. That would be the perfect game.

One thing that would make this even more entertaining would be the functionality of playing this game pitted against each other. Where each player can control a side on their own device. The problems this could pose is synchronizing the players movement in real time, but who knows this could change sometime soon.

Though Snow Fight was released about last year, it is still as much fun and entertainment as any other game.

Here is a game play video :
The second cool offering is Ice Riders. A flick and skate game, this does take a little getting used to at first. The idea is simple, you have a finite amount of water to create an icy ramp from (almost like finite ink to draw paths in some other games) When you are done, the skater is released and he will skate/slide on the path you drew. The aim is to collect the red dots (Bonuses) to complete the level and score. At first, when you draw the path, it is actually zoomed out but when the skater is released, the screen zooms in and the distances that you could have estimated change. This is the reason why it takes a couple of tried before you can get it right. Since the position of the bonus dots are random on each level, you cannot play it over and over to perfect the level/game. It is a game of skill and entertaining at the same time, it is priced at $0.99 and available as an universal app. 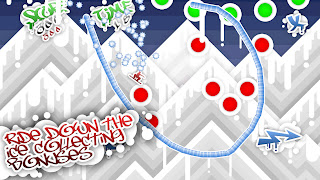 A game play video for Ice Riders can be seen here Both these games can be downloaded from the iTunes store. You could follow us on facebook at http://www.facebook.com/pages/ReviewMe/137640632964588
App Gaming iOS Review