I remember in the 80's specially in reference to the ZX Spectrum, there were a lot of game developing companies that set shop. Some names that have immortalized themselves are Konami, Imagine, Ocean amongst others, however there was one CodeMasters with series of games like Dizzy, Seymour and several other Simulators. They also remain known as they were one of the few companies that denied distribution of their games for use on emulators.

The Darlings, the founders of the CodeMasters, the Patriarch Jim Darling and the sons David and Richard. The then 19 and 18 year olds started CodeMasters in 1986, their focus was more so on budget software and they knew their stuff, they were always in the top 10 charts. They have been one of the few studios that did not disappear when the 8-bit revolution ended. They were also awarded the Order of the British Empire for their services to the Computer Games Industry in 2008. Reliance Big Entertainment, an Indian company acquired a 50% stake in CodeMasters on April 5th 2010. This should have given the Darlings a bit of leverage and I guess it did. If you followed any of the spectrum magazines like YS (Your Sinclair) or SU (Sinclair User) you will have known that the Darlings were on and off features in them, not just the boys David and Richard, but also the Darling girls (Lizzie who was drawing covers after her art school training) and Abigail and the Darling kids John, William and Annie, so they are all set to rock if they are interested in the industry, they should be about 20'ish now.

This is the Darling Brothers when they started CodeMasters, 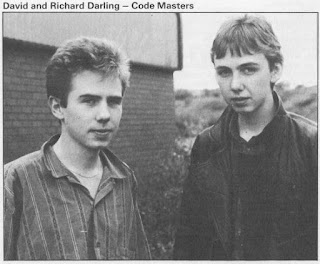 A much different looking David is back with a new startup company Kwalee. They specialize in Social multiplayer games. They have just released their first game called GoBang Social. It is available on the App store.

The hit that got CodeMasters into the limelight was the Dizzy games, the character was an egg. The game was made by the Oliver Twins (Andrew and Philip) who at the time were quite a celebrities in their own ways. The Spectrum even with the limitations of the way colours were displayed on screen and being limited to the 8 colours had some amazing graphics.

Kwalee, as the description suggests,


About: Kwalee is a startup company based in Leamington Spa to develop and publish apps for mobile devices. Founded by David Darling CBE who has many decades of experience at the top level of the video game industry with contributions to very many #1 games on many platforms in his CV. Kwalee is different. We seek to excite and entertain our customers with innovative new products that provide special experiences. Our ethos is based around a set of core values that put the customer first and which harness the creative skills of our staff to the maximum in order to do so. Kwalee is still at its beginning and so is very actively recruiting those special people who want to join us in our exciting journey.

is similar to what CodeMasters business model was, being a publishing house for apps like Chillingo. This would be good if they can get talented developers publish through them. However Kwalee already has a full house in terms of staff (http://kwalee.com/people/). Some really talented people from CodeMasters and then a lot of young but talented people. However despite all of this, the GoBang Social seems to fizzle out instead of make a big bang.

You can download the GoBang social app from http://ax.itunes.apple.com/app/gobang-social/id497961733 it is Free and they even have an iPad giveaway.

Here are some screenshots

We wish them all the best as Kwalee, and also have the expectations that we had of CodeMasters in terms of gameplay, engagement and price.