Math and I have had a love and hate relationship, and I guess that I am not the only one like this. There are however those that make a career on math, or others that make money off math and then still those that make graphics and wonderful code off math.

So what is all this math about? Cyrillian Inc, have just released the QED Solver. I guess QED stands for Quadratic Equation D???.
If you jump to conclusions without reading what it does, you would conclude that it is a shiny Nerd device. After all the iPad does not have a calculator, can you imagine that!! Apple have a wonderful shiny calculator on the iPhones, but none on the iPad. So when the smarty types (as vs the sporty types) buy a new iPad, it is in fact just as dear or more powerful than one of the scientific calculators. So what does all of that have to do with QED?

QED in simple terms is an app that allows for solving equations, (or you can call these problems). Earlier there was a review for an App called Soulver, this would allow you to type in plain language, it would parse the numbers and try to make sense out of them. With QED, it is similar, you can type in as you would write in a book and then hit the shiny green Solve button to get answers. Not only does QED solve the problems but also provide a graph and then a summary (solution report).

having said that, it also solves basic math, so you do not have to be an engineer or a mathematician to be able to harness the power of this app. It can be used for basic calculations but not like a simple calculator. It needs that you give it an equation, after all it is an equation solver. It can solve equations that have direct relationship and it can also solve equations with an indirect relationship or no relationship. The reporting feature offers a well formatted layout similar to what we were taught at school, don't know if the kids these days ever learn step-by-step. 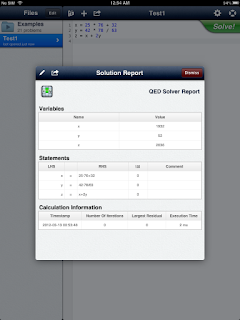 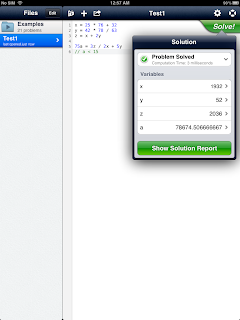 For the majority that could be Math-phobic, I have used this simple equation to demonstrate how even a high-school kid can use this app to solve and check their homework. For those that love the puzzle games, you can try to solve the equation for the puzzles like, "Last year my age was twice that of my son, next year twice the age of my son and half the age of my wife is ..." 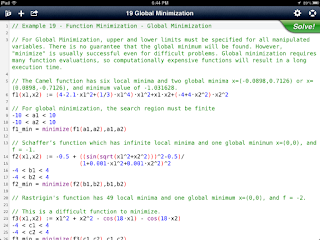 A set of extra keys get attached to the keyboard for making use of the commonly used functions / symbols and characters. The solved equations can be emails to friends, colleagues right from the app. There is the functionality to create user-defined functions, the examples suggest that it is very simple, it is as simple as 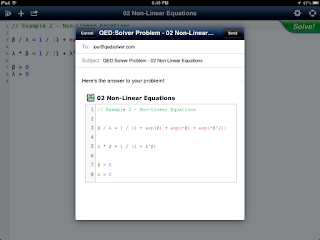 One of the features in the beautiful UI that is missing is the ability to modify the numbers like in Codea, it would be so much better as experience if the user could just tap on a number and swipe to increase/decrease the value. And if there could be a tab/list of the user functions defined. The standard functions are displayed on the keyboard under the f(x) button. It would help if there was autocomplete.

it grows on you as you start to use it more and more. There is no doubt that this is an app for Engineers and Mathematicians, but in my belief it is an app for everyone, so I am trying to have a look at the simpler and more practical use of the same. Here's an example of using it for calculating compound interest

and if you solve that, you will get a list of all the variables that were used in this problem and the resulting value of m can be noted too. it is actually that simple, write the formula, set the values and then solve it to get the answers. Now most developers can argue that they can always use this in the language of their choice, the point is that maybe so, but once you use this personally, you will realise how easy it is in comparison to writing a small program to calculate certain equations/formula.

QED Sovler comes with comprehensive help and a very rich repository of examples. This is an app that I can recommend based on the ease of use and the appealing natureof the GUI. For the true power of this app, it needs to be used by the end user in their own settings, it is as magical as the iPad, it changes with the application it is used in, it can be a high-schoolers homework or it can be an engineer's working sheet or a scientists scratch pad/calculator. No one area can be defines as the exclusive ares for this app, it scales so well across the domains and fits just about right.

And we have two copies of QED Solver for one lucky winner, all you need to do
1. Follow @whatsin4me
2. Retweet the message "Read reviewme.oz-apps.com, follow @whatsin4me and RT this msg. You might win a copy of #QEDSolver from @QEDSolver"

and you can follow us on Facebook by liking our page at
http://www.facebook.com/pages/ReviewMe/137640632964588
iOS Review Text Editors Tool