MY Corona Cider - Apple Juice? The new Debugger in Town

Apple a day keeps the doctor away, but in this modern age, Apple a day is the way of life, with more than 3 million Apple "the new iPads" sold and the number of other Apple devices sold this is a good time to be a developer. If you are a developer, the next thing you need are the development tools. This is all fine as long as you are using the Apple provided xCode suite of tools, but when you start to use other frameworks, there is a void, a gap of good tools.

Now, for those that know MY Developers, a team that has taken the Corona SDK community by storm and have immediately established themselves as the gurus with network communications and lua in the form of their offerings, the Corona Ultimote, Corona Profiler, Corona AutoLAN and now their latest offering Corona Cider. They have brought to Corona what Ansca should have in the first place, but then that slack on Ansca's part has opened up the market for so many good developers to bring in their offerings. 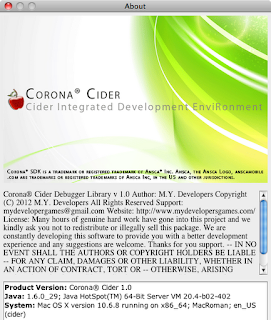 So what is Corona Cider?

Corona Cider, is a debugger for your coronaSDK apps. The biggest problem that a lot of developers have been facing till date is that of debugging their apps. Most developers had to add a series of print statements to see what was happening, dumping out variables was not exactly easy or fun, specially when they were tables or nested tables. This was more of a hit and miss way and a lot of time was wasted in this form of debugging and a variable that never got assigned due to omission or a typo could have thrown your development time off track. Not to forget some apps that still print debug information ... from an app that is available on the app store.

MY Developers are really smart on this one, the Ansca debugger is a terminal based debugger and not such a pleasure to use. So they have provided a complete IDE to the developers that has the functionality of code syntax highlighting, displaying breakpoints, etc Oracle open-sourced NetBEans and MY developers have used this as the platform to offer both Windows and Mac users. The slickest part of this is based on their experience with networking they have data from the app being passed over to the debugger IDE via UDP. This overcomes the Ansca Debugger limitations and provides a near real-time experience in debugging.

There are a few gotchas that one must be aware of, you need to open the project in Cider and also in the Corona Simulator for it to work. The stepping through code is easy but can be flaky at times. The variables are all displayed and can be expanded for detailed viewing. This is the best feature that any Corona Developer could ask for.

It does not stop there, there is more... This is aimed at being a total solution, an IDE not a visual debugger alone. So you get with this, a complete Project Management system that manages the project and files. It has Ultimote integration and also support for Hardware keys (Android Versions) This allows the user to actually test the app in the Ansca Simulator and still test the app with the accelerometer, gyroscope, etc all from the IDE itself. It even breaks on Errors and highlights the line that is causing the error. There are a lot of extras that come-in for free given that this is built on the NetBeans shell. 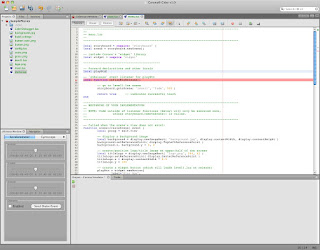 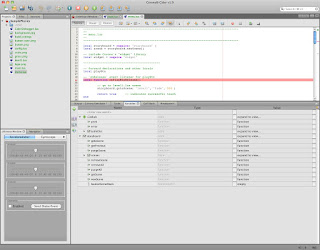 It is easier to understand that Corona Cider has three major functionalities, Project Management, Debugger and Ultimote testing. The choice of platform NetBeans has offered a host of other functionality like SVN, GIT integration. MY Developers are working on bettering this product and could/might have plug-ins to enhance the way you work with Corona Cider. So keep an eye out, there could be more surprises that can get added to this suite of tools. It would be nice if the Corona Simulator was spawned automatically when the Debug/Run button was pressed and kill it when the stop button was pressed.

And we have a copy of Corona CIDER for one lucky winner, all you need to do
1. Follow @whatsin4me
2. Retweet the message "Read reviewme.oz-apps.com, follow @whatsin4me and RT this msg. You might win a copy of #CIDER from #MyDevelopers"
or
Follow us on Facebook by liking our page at
http://www.facebook.com/pages/ReviewMe/137640632964588