Hype - What's it all about?

If you have been a computer user since the 80's or the early 90's you would recollect the transition of the various tools that make life easy for us. Developers have strived hard to create easy to use/user friendly interfaces to many complex tasks. So what is this Hype all about, does it measure up to the Hype?

Hype in a single line is an App that help create HTML5 Animated and interactive content. However it is not just that, it is a lot more than that sentence. 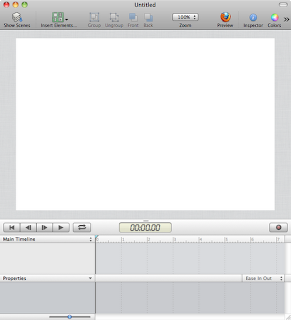 On startup, the first impressions that I got were "Flash" and "PowerPoint/Keynote". There is a timeline and keyframes, and a big blank canvas to work with. It reminds me of a lot more apps in many ways, the point being that it is a rather easy and inviting interface. It kind of indicates, here's a blank canvas, let's put something on it. The toolbar above is self explanatory. However the only thing that might not be self evident is the scenes vs elements.

When you start the app, a popup window appears, (something that reminds me of tips windows which used to be a template in VB and overused by developers) however my first impulse generally is to dismiss it, for some strange reason the way this tip window was presented, I actually clicked on the watch video, and I am glad that I did. The introductory video takes you through the simple task of creating some elements, animating them, adding a scene, adding the interactivity and finishing with publishing it as HTML5. To the extend that it even discusses how you can take the resources and the three lines of HTML markup code and add it to your own website/blog etc.

The intro video for all to see how easy it it to use Hype.

The concept behind this app is simple, there are a series of cards that you can display on screen, one at a time. These cards are called scenes. Each scene has elements, these elements can be an image, a vector element, video or a HTML widget. To create animation, you can handcraft the animation (create tweens between the two stages of the elements) by simple pressing the record button, setting the properties that you want, changing to another frame setting the new properties and when you are done, you simply toggle the recording to off and voila!! done... Just press play to see the same playback as per your settings. The inspector can be used to fine tune/tweak the settings. The same can be previewed in the browser of your choice and published (in HTML5 format) to the web.

What is so special?

The thing that is special about Hype is that this is a tool that allows to create animated HTML based content visually with the minimal effort that which would have otherwise been a real Herculean task using a text editor alone.

The app takes advantage of CSS3 transitions and that provides all of the cool FX that we have come to expect of Flash alone. Though one can add interactivity, there is absolutely no coding required, which is definitely one of the bit that makes this app a must have for many that would want to work on their websites. The content transitions to the mobile devices and performs equally well on them too.

Most of all, if you are an advanced web developer that feels the need to dirty your hands with the HTML code, you can click on the element and edit the HTML content on the fly with live preview. You do not have to go through a text editor and browse through lines and lines of code to find that one bit you need to change/edit.

It would be very difficult to say yes, that's all because this is just the tip of what Hype can do. These are the published features that one would generally use Hype for. Since it creates HTML5 content, which is generally text, it is editable and since it can be embedded into other html content like widgets, this can be used as a HTML5 visual developer, and the final results can be used in HTML5 games, even in the new iBooks Author.

If you are stuck at any point, there is a very rich and in-dept set of videos and documentation to help get back on track. Most importantly, it is so simple and intuitive that you might not really need to refer to the documentation. However it is worth having a look at the videos on the Tumult site.

This is one of those apps that are so wonderful that finding words to describe Awesomeness are not enough and most of them could end up being repetitive. So to avoid that and let you have a look at the awesomeness, you can download a trial version from the Tumult website at http://tumultco.com/hype/download/ and if you are interested to see the results of using Hype, there is a comprehensive gallery available at http://tumultco.com/hype/gallery/

All of them are good, but some of the ones that tickled my interest can be found at

It is even used by NASA on their page at http://open.nasa.gov/exploration-roadmap/

This is a very powerful tool, for the simple reason that it is visual, has a lot of abilities for aligning, placing elements on the screen like top development tools do. The inspector helps to easily tweak/fine-tune these values. The UI is clean and pleasing, not overtly complicated or confusing. The final results are amazing and can be embedded into a variety of applications, including RapidWeaver, iWeb, Flux, etc It can also be exported for use with iBooks. It renders fine on a variety of devices, platforms and browsers.

There is however a suggestion that if there would be a new options added to Hype to export as a mobile app for the iOS and/or the Android, it will be a hot app within no time for a quick and easy interactive app. I could not find a way to copy the resulting files on a mobile device and run it from there, the only way would be to wrap a native app wrapper around it, which if the developers Tumult could do, would be so wonderful.

NOTE: There are still ways that you can still do the same using PhoneGap and create a native app for the mobile devices. If there would be a functionality from Hype to do all of this, it would be so much better and one stop shop easier for the developers. Here is a link to a YouTube video that I found on this.


In short, an app that is too good to overlook if you work with HTML/web. If you are a developer you can save on time and money and have professional websites without Flash animation that work on all platforms and devices... easily. If you are a beginner,... easily, a rocket scientist like at NASA... still easily.

A quick video summary of what's new in the 1.5 version


Hype is not just a hype, it is actually very easy and powerful.


NOTE: There is no giveaway for this app, but if you do want to spread the love about Reviewme you can do so by RT'ing
"Follow @whatsin4me and read reviewme.oz-apps.com for some stellar software and reviews"