Gravity Quest - Will the real space game please stand up... 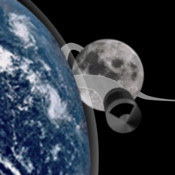 When a larger brand name puts out a new title, everyone follows, specially if the franchise is Angry Birds. After years being on the top of the charts, everyone had played Angry Birds, and it was slipping, so came the Angry Birds Rio, so to keep the top spot, there was the need for a new game, and that is coming in the form of Angry Birds in Space. This review is not about the Angry Birds in Space, but about a game made by a small Independent Developer called ShamaInteractive that created this game last year.

The game is simple, you have to launch a ship from the bottom of the screen station to the top of the screen. The screens keep adding planets and as everyone knows planets have a gravity field which can change the course of any moving body in space. The challenges get more difficult with multiple planetary gravitational fields. It is quite a challenge and it is not as simple as one might think, it does get engaging.

It is a good engaging game, but the developer also acknowledges that at the time of creating this game, graphics was a major financial decision, one that he might have regretted in hindsight, the game is pretty decent, but with a nice cartoony graphic, people would have liked it better. I doubt that he could have given it the Angry Birds treatment, specially given that there are more people that work on the Angry Birds Q&A team than many small development companies.

This is a short review, the game is nice, try it out. If you buy and play Angry Birds in Space, you can also see that a similar game was created and released by Shama Interactive in May 2011, maybe the same time when Rovio might have looked at it and gone, Hmmm, there's our next big one. The point here is that a lot of small/part time developers have good game ideas, but are unable to get that to market in the way that they might have wanted, due to resource crunches, be if Financial or Time.

So, will the real Space Game please stand up....