The Zombies are here...

No matter what religious beliefs you subscribe to, there is always a higher being that will take care of you, some even subscribe to the fact that there is Life after Death. Similarly, there are those that believe in the supernatural and viral outbreaks. Whatever theory you might subscribe to, one popular strain of belief are the Undead or the Living Dead, a.k.a. Zombies, Greenish Blue creatures with rotting corpses that are out to nourish their dead selves with the victims brains.

What would you do if there was an outbreak and the world around you was being infected with Zombies and they were just multiplying by infecting others. Apart from being scared and running, there needs to be a plan of action, one that helps you think through your choices and help you navigate through this outbreak.

Zombies are not new, the successful franchise of comics book series that was then converted into a TV series, "The walking dead" and the very popular "Plants vs Zombies" and then the Shaun Of the Dead series to name a few have made Zombies mainstream and everyone is aware about them.

From Mongadillo Studios comes an iOS game that is a Graphical Adventure Game that provides the player with choices and navigates the game accordingly. The theme of the game is Zombies, but it is not just a game as Mongadillo Studios have combined this game with a survival simulator. The best part about this app is that no two games are the same, It is a wonderful combination of fixed locations but random events and outcomes. This also adds a new dimension to the gameplay.

The game is interactive but not a RPG, so the fights and the survivor party is not like what one would expect in a RPG, there are no level ups and spells or potions that you can buy, it is like life, keep alive, stay out of trouble and most important, "Stay Alive" and reach a safe destination. So if you are after a zombie hack-fest this might not be for you. This is an adventure not an action FPS type game.

The game includes illustrations by the DC comic artist, Matt Haley and the concept and other art like the Logo, etc was created by Mongadillo Studios, the code and engine was developed by OZApps and the music by the OXCart.

It does not matter if you believe in Zombies or not, if you do not believe in Zombies think of them as virally infected humans that can infect others and you have to steer clear of them. Which ever way you think of them, the goal is save yourself and get to safety. This can prove to be hours of fun and makes you think your decisions over as there is no right or wrong, but each decision influences the outcome of what unfolds. 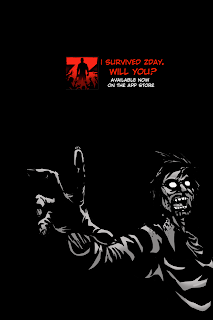