When there are several options to choose from, with each framework claiming to be better than the other, how do you select a framework that fits your requirements? A good start would be that it makes it easy to port your app over to multiple devices, provide you with an easy to use framework that takes away the hassles of code redundancy. Is this it?

AGK, or the AppGameKit is a solution that is aimed at resolving the fragmentation caused by the numerous mobile devices. The creators, aptly known as "The Game Creators Ltd" have been a well known name with developers whilst they had Free and Paid frameworks generally based on the Dark Basic range. The void that AGK fills is the one that the various Basic variants did not fill for Mobile Deployment, so from the experience and language of Dark Basic, came AGK. This is a first and an amazing step, it kind of makes things easier for developers on a variety of levels but at the same time it kind of disappoints most Apple/Mac users.

There are two tiers, (as called by the developers of AGK) Tier 1 runs the basic variant and creates mobile apps coded in Dark Basic type Basic language all from a self contained IDE. Tier 2 is the native C++ version of the framework that mimics the Tier 1 Basic script, providing more speed and power in comparison. Now as a Visual Basic Developer from yesteryears, I was quite thrilled at the fact that I can use Basic to develop mobile apps, I do not have to rely on Objective-C etc. Since I had moved on to a Mac from a Windows Box, mainly for iOS development, to use Tier1 - Basic, I need a Windows Box, there is no native Mac IDE for the same. This is the disappointment I was talking about. I appreciate the power of native c++, but if I cannot use the easy bits of AGK just because I have a Mac and have to use C++ which makes thing even worse than using objective-C. Now I am sure that here since this is the first release of AGK, the developers have a Mac version in development.

Well, The Tier 1 IDE that runs only on windows might sound like another bit of let down, but in fact it is really an amazing thing. Till date developers have been crying, literally crying as they could not develop for the iOS using their windows boxes. Many that have used Apple based solutions have also had an issue of how to test an app on an actual device. The cool thing with AGK is that if you run a Player App on the device, this then over the WiFi downloads the compiled app and runs it natively on the device, no more syncing and wires. However remember this is like a virtual machine running the app in the AGK player, somewhat like a java applet or a .NET program. That is definitely a big win for most developers. 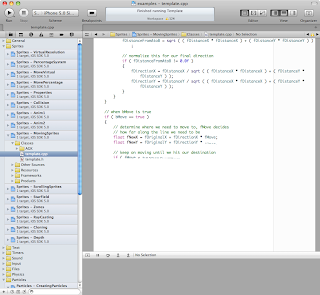 There are quite a few Libraries that are available in AGK, the most important and significant one of them all, the Physics Library with Box2D, has a particles engine, support for sprites, joysticks, virtual and on-screen, multi-player amongst others. For the purpose of this review, I tested most of the samples on the Mac and the iOS 5 simulator, the apps worked perfectly fine, however I did feel that the Box2D sample was a bit slow, but then I did not want to tinker with C++ to change it. Some of the samples that amazed me with the simplicity of code were the particles sample, even in C++, it is so simple to create particles t show explosions. Here's an excerpt. 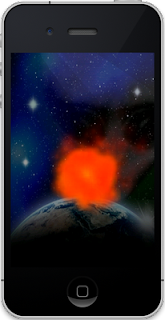 As mentioned earlier, AGK is still a new release, it has plans for Android (2.3), Windows Phone 7and Blackberry in the future releases. There could be changes in these (everyone knows that HP went belly up on the WebOS as soon as it launched despite the fact that it was *much* better than RIM's playbook)

As for some questions that most developers have in mind, Does it support monetization? to which, if you are using Tier 1 (Basic) then it is not possible, but if you are using tier 2, (Native C++) then it can be added by the developer themselves anyways. If developers are thinking if they can create extensions or not, then the answer to that is Not as yet as Tier 1 has no support, and in Tier 2, you can use them anyways. There is a lack of primitive vector graphics objects such as Lines, Boxes and Circles, these will be available in future releases.

The AGK is ready for prime time consumption and knowing that the developers have released the same, however given that it is the first release, there are a couple of major TODO's that could have been pending with the developers. Since the cost for AGK is a one time cost, with no royalties or annual renewals, it is a worthy investment, specially if you use a windows box for development than a Mac. Plus given that the 30% discount is valid for this month only, this is too good an offer to pass.