Be part of the history or the future, either ways it fun

Deep red skies, the coloured flag hoisted, the seas are your playground, you are the feared name or you are the hunted. That was long ago when pirates ruled the seas, there are still a few like in the news a while ago, when the Somalian pirates took over an oil tanker. Anyways, so this is the history part of things, the future? This is the *first* release so as to say using the Moai framework (reviewed here earlier).

I personally like the strategy and RTS type games, so having spend hours playing the Microsoft "Age of" and the several CnC type games, Crimson:SP seemed to be the right ft for me, it is a RTS type game. I was not aware of the fact when I sat down to review it. So the first few screens that i was greeted with were the title screen, which were amazingly inviting. Then the Main Menu, where the options are to play the Sagas or Duels and options to set other settings. Here, the Chapters are selectable, the game comes with Chapter 1 as FREE and Chapter 2 purchasable from the iTunes Store, the rest are not as yet created. One good thing that the developers did was to create empty slots for the other chapters, that way the only reason for anyone to update a 142 MB of game would be if there were any bugs or features added. On selecting the Chapter, this screen is a bit distracting from the lovely graphics and UI that I would have expected. The chapter is then split into voyages, which are levels in each mission (Chapter). Each of the voyages explain the Plan and provide a little detail, background on the story and the gameplay. 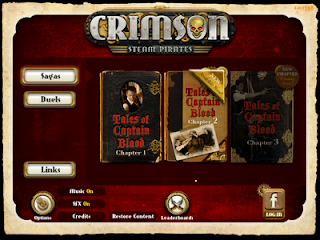 Then starts the actual level, it provides Tips on how to play. The Gamescreen like any good RTS, has a clear and unobstructed layout. The game is a turn by turn based game, and the graphics are amazing. The only let down between the opening scenes and the Game is the Chapter/Menu UI, which would have seemed much better had they been cartoon kind of characters than actors dressed up as pirates, etc. 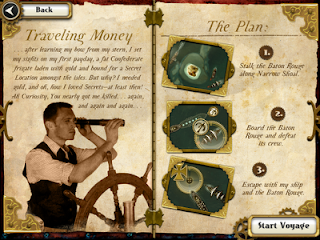 The game is very responsive, pretty and playable. The ship can be moved by moving the ghosted handle that indicates where the ship will move to when moved, it is also the way to interact and use other abilities of the ship, like repair, move, double speed, rapid fire, etc. The Gaols are on the screen and ticked off everytime you complete one of them. There are sub-goals that are added at times. The screen can be pinched to zoom out or zoomed into. The ship moves only in a circular or an Arc shaped manner from the current point, At the first attempt, I could not figure out how to cancel the command, if wrongly chosen before hitting play, but it is simple, just press the X and choose another command. There is plenty of shooting and naval battles, so keep repairing the ship when you get the chance. The game also features a voyage par, the number of turns in which you must complete the voyage, and there are extra points for being under par. Sinking enemy boats gets you extra points. 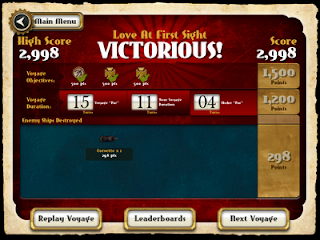 The voyages being turn based take a while to play, so this game is not for those wanting a quick game, RTS are never for a quickie, this needs one to relax, and spend some serious time on it to enjoy the game in its entirety. 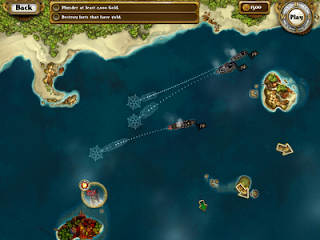 From a technical point of view, this is built on Moai, which uses Lua as a base and objective-C as the glue to put the game together. Each object in the game is a lua file (that's the way Moai rolls). Think of it more like a class file. This definitely is a feather in the cap for Moai and demonstrates that Moai is not just a name, it is ready for serious stuff.

The game has already hit #1 spot in quite a few countries, maybe because it is such a brilliant game and the first chapter (free) itself is worth a few hours of fun.

The only gripe with the game is the fact that it is iPad Only. It could have been ported to the iPhone, but the developers might have had reasons for their decision.