Advertisement : Office Blues Launched
Announcing one of our own games has been approved by Apple and released on the iTunes Store for purchase. Since we want the reviews to be fair, we do not review our own Software but we can always announce the same, letting you know about it.

The game is a Puzzle based game where the player has to escape the chasing person. As the player, you are allowed to move one square in any of the four directions, North, South, East or West, and no diagonal movement allowed, however the pursuer can move two squares. The movement logic is predictable that means there is a system to beat the pursuer. Observer his movements and use it to your benefit.

The characters are based on a comic strip that was planned to be released but then had to be shelved due to other projects taking over. We are glad that the characters could be used in the game and fit well.

The EDP is made up of three main characters, the Boss, a short guy with long hair and beard, his deputy, the Shasenstein A near Zombie, that moves like Frankenstein and the System Admin that has the Medusa look but instead of the snakes, has Network Cables and he wants to re-route your IP traffic.

The pixel sprites are made by an upcoming but talented pixel artist, Kyle Sun, the Music is provided by the Talented Aaron Spencer and some FX sounds from Sound Jig. 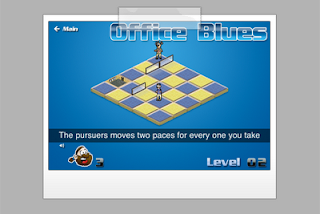 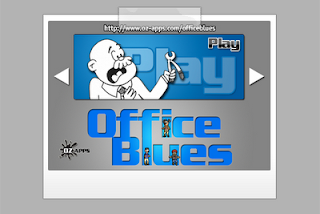 And we have a copy of Office Blues for one lucky winner, all you need to do
1. Follow @whatsin4me
2. Retweet the message "Read reviewme.oz-apps.com, follow @whatsin4me and RT this msg. You might win a copy of #OfficeBlues from @OZApps"
or
Follow us on Facebook by liking our page at
http://www.facebook.com/pages/ReviewMe/137640632964588
Announcement App Corona Developer Gaming Giveaway iOS Mobile Review Software