Need a second web camera? Need to stream from where you are?

Ever watched one of those TV Series where a person walks around and the rest of the team watch the whole scene on their large projectors and look for suspects, etc? I am a big fan of those series and have always wondered if the little web cams that Logitech, Microsoft make would be wireless and work remotely. However with Apple's "One more thing" and the developers thinking of making use of each little piece of hardware on the iOS devices, SHAPE Services have succeeded in turning the iOS device into a WebCamera 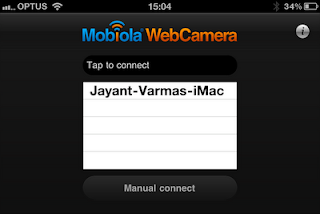 Not only have they successfully managed to turn the iOS devices, they have a host of mobile devices, like the Blackberry's, Symbian (Nokia Only) and Windows Mobile. Since we tried out the iOS version and the Mac version of the desktop, all references henceforth refer to these only. Start the app and it tries to connect to a desktop device to stream data to. One might argue that if it tries to auto connect, then it is connecting to a device available on the WiFi network only. The settings have a Manual configuration option, so one can connected to a fixed IP device rather than devices on the same WiFi network (Auto-detect)
Upon successful connection, it starts streaming the camera images to the desktop. The software is a bit temperamental, if the mobile device app starts to search before the desktop app is started, then the connection does not succeed. So the sequence is the Desktop app first, then the mobile app. Upon connection, the device capture, etc can be controlled from the desktop, capturing screenshots or recording video. Given that streaming hi-res video and images is yet a fledgling, the quality achieved as of date is passable, and if this was on public networks not the WiFi (we tested on the Home WiFi) there is a possibility of even slower or jerkier streams. 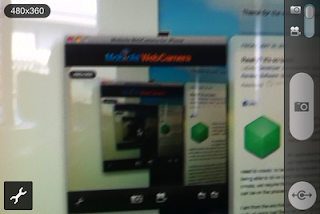 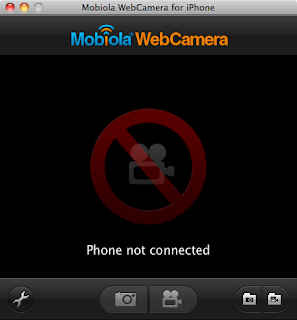 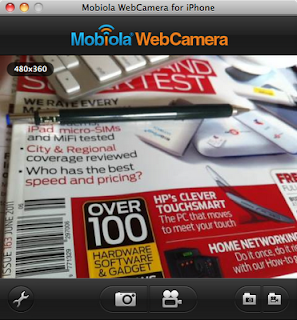 However having said that, the software is good and it works. In fact it works better than the early web cameras when the whole Logitech Webcam thing started in the early 2000's. There's "One more thing" this makes it so much better, the software creates two devices on the desktop, Mobiola Video Source and Mobiola Audio Source, these can be used with Skype or any other software that can use an audio and video device, Boinx TV users can use this as a camera source. on the Desktop. So if it was that extra camera that was desired, the iPhone can now fulfill that requirement via web camera. Best of all, it is available for $1.99 as compared to an external web camera that would at least cost about $20+. 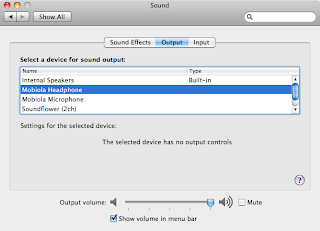 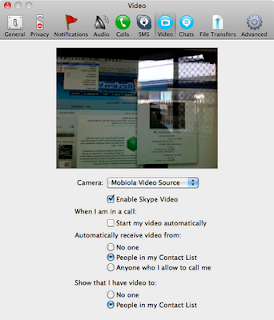 Just like the Inputs, the Mobiola audio devices are a way, the output of the sounds from the desktop can be streamed on to the mobile device

Thinking of scenarios, do not leave the iPhones as NanyCams, we are not responsible for missing iPhones. However since it does work with a variety of hardware, an earlier model of Blackberry or Nokia Phones would be a good option to leave as a web cam. Do not misuse the same, I have seen people holding their phones with the flip lid on but the camera is pointing publicly and live.

And we have a copy of WebCamera for one lucky winner, all you need to do
1. Follow @whatsin4me
2. Retweet the message "Read reviewme.oz-apps.com, follow @whatsin4me and RT this msg. You might win a copy of #WebCamera from #ShapeServices"
or
Follow us on Facebook by liking our page at
http://www.facebook.com/pages/ReviewMe/137640632964588
Giveaway iOS Mac App Mac OSX Mobile Operating System Review Software System Tool Windows