If time is money, then make more money...

It is said, Time is Money and it is a fact, unless one is employed in a Government/Semi-Govt. Department (in any part of the world). I look at the case scenario of a pavement company that I was developing some Analytical software for about 2 years ago they had to track every hour for each of their Employees, Engineers and Contractors to bill their clients accordingly. This was then followed by dispatching Invoices for payment and then tracking if they were paid or not.

As a developer, or an a professional or an Indie that would charge by the Hour or by the job, it is important to have some form of tracking the billable hours and invoices. MarketCircle has a solution for both the segments of the market, the small business and the medium to large businesses in the form on Billings and Billings Pro. 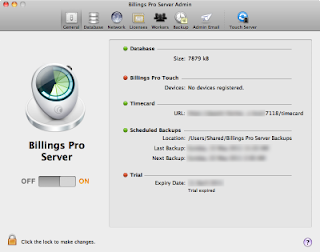 On the surface the basic differences between the two might seem simple. THe main differences are however the underlying architecture and the fact that one works on a single user app mode, while the Pro works on client server architecture. To be able to use the Pro version, a Billings Server needs to be setup which can be on the same Mac as the Client or on a MacMini server. MarketCircle also provide those that do not have the hardware to run these apps, the hosted option, more like the SaaS model or what many refer to loosely as the Cloud option. 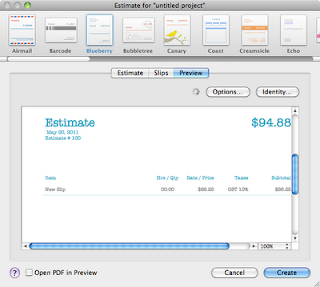 It has taken us a while before we could review this application, as the features available in Billings and Billings Pro are so extensive that it would be impossible to talk about them in this article without missing a few. So we are trying to cover as much of the feature set as we can.

The concept of Billings is simple. A Business has Clients, The business performs tasks for a client and then the client is billed for the task via an Invoice and when the invoice is paid, it is marked off as paid. Many businesses use a BookKeeper for this kind of work and use software like MYOB and Quickbooks. Talk to business owners that use one of these software, Accounting software work good with accounting and cost as much too. However Billings /Pro fills in the niche for those that want to manage their invoicing processes. In fact Billings complements accounting software as it can export data for Quickbooks and several other formats.

The issues faced during testing are similar to the ones that were faced with a previous product reviewed, for an invoice to be valid in Australia (Document NAT 11675-08.2004) there are certain requirements like ABN Number, etc that need to be included on the invoice. However since Billings has the ability to design the Invoices, that should not be an issue. It comes with a large collection (About 30 Templates) of Invoices which look amazingly beautiful. It almost makes Invoices into a piece of Art more than a boring financial document.

Some other small nuances that were irksome were for Indies, billing and Invoicing might be at the end of the week, and when the completed, due etc are clicked, the current date is selected as the date to close, but there could be the case where that date might be in the past.

Second thing that might have been that I could not get my head around was sometimes there can be GST Inclusive prices, which means that reverse calculations need to take place, this is not supported in Billings. Here's an example, say a client is charged $250 incl. GST for a service which is inclusive of the 10% GST, it should calculate the price as $227 and GST as $23 as that needs to be provided to the Tax Office.

There are many things that are included thoughtfully into Billings, which include the functionality to handle currencies with three decimal points like many middle eastern currencies.

Estimates can be send to clients, these are also known as a quotation. These estimates can be converted into Working Slips that can then be created into Invoices and send to clients. Blueprints (can be called a working template, where certain line items that are to be charged for every invoice) can be created from the existing slip/s or create new slips/estimates from Blueprints. This saves manual creation of line items in every new estimate or slip. Have invoices that need to be send out on a regular basis with the same details, Billings supports that under recurring invoices. Before Invoices can be send, Pro-Forma Invoices can be created for approvals. Clients can be send regular statements.

The hub or the centre of everything for Billings is the Preferences Dialog, it houses all the configuration settings. In the Taxes section, on selecting the region, the taxes are set according to the prevailing type of taxes and rates.
Numbering can be managed from the Preferences too, where the Prefix and the numeric format can be set.
Labels can allow for customisation of the Groups, Categories, payments and Workers. So categories like Meetings, Training, Development, Design, Editing, etc are all set here and used when creating a new work slip.
Extra Fields can be used for custom fields and they are provided as text that can be overridden as per the requirements of the user.
other features include looking at Currencies, Blueprints, Hot Keys, Timers, Identity. 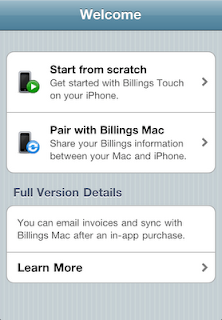 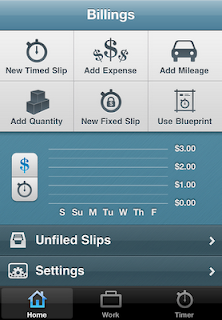 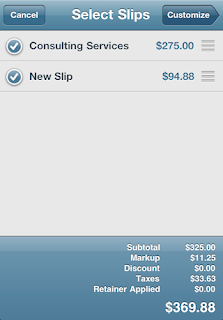 The best feature that is available in both Billings and Billings Pro is the Touch feature, which is synching with an iOS device. Though the Billings iOS App is Free, to enable all functionality, it requires an In-App purchase to activate the features like Synching the iOS device db with the desktop db. However in the Pro version, it is already included. So one could use the Billings App as a stand alone app and enter data on the device, It will work and do most of what one would expect from it except for synching over WiFi and emailing Invoices. So the iOS App is still a good starting point for a beautiful Free app on the iPhone/iPod to manage Invoices.

The Application is not only an amazing app, it is also an esthetically beautiful app and the winner of several Apple awards. 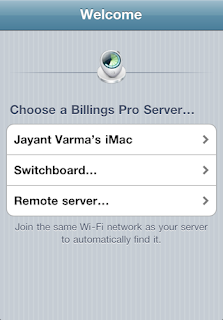 Billing Pro, on the other hand not comes with Billing Pro Server and Billings Pro client and the iOS version but also includes Timecard Server which runs off the server and can be accessed via any web browser (minimum IE 8)

All in all, a casual review cannot do justice to the beauty of an app that Billings/Pro is. For those readers interested in keeping records for their own self, Billings is a good way to start, a professional looking app with full functionality except emailing invoices (that can be purchased via In-App purchase) for the Indie that wants slightly more involved and complete app that works on the Desktop, then Billings is the way to go and for small to medium businesses, Billings Pro as an outright purchase or a hosted option is the way to go. Prices start at less than $50 for billings. MarketCircle also has starter Pro packages that start from $1,569.95 for upto 5 users and comes with Billings Pro, Pro Touch, Timecard, Switchboard and 1 year of premium support.

It would be quicker to setup and complete the entire invoicing of all projects etc than it was to write this review, not counting time in testing and running the features, etc. It is extremely easy to use.

Billings is an app that allows one to work on what is important leaving out all the jazz and keep total track of ones clients and finances.

And we have a copy of Billings for one lucky winner, all you need to do
1. Follow @whatsin4me
2. Retweet the message "Read reviewme.oz-apps.com, follow @whatsin4me and RT this msg. You might win a copy of #Billings from @MarketCircle"