Those that have been in the Industry for a while can recognise what Cocomo is, those who are new will be left wondering about what that it. Is it an older version of Cocoa or something that Cocoa was build from. It is neither, Cocomo is The Constructive Cost Model (COCOMO) is an algorithmic software cost estimation model developed by Barry Boehm. [Source : Wikipedia]

One of the metrics for cost estimation and work estimation is KLOC, or 1000 Lines of Code. This was very much applicable with the older languages and technologies, in the modern languages and visual development, there are more lines for events and visual stuff than for actual code. However, this is a metric that is still used by a lot of developers and more so to also brag, to brag about how many lines of code have been written. This could mean productivity to some, I believe otherwise.

However, iKLOC is a tool that calculates the lines of code in the xcode projects. This is specific for xCode projects only. I opened an iOS project that I had worked on and it gave me statistics on that, I had 16,576 lines of code, see... 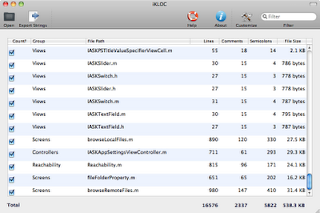 While I was working on the project, It seemed like eternity and as if it had millions of lines of code.

The app is available on the MacApp store for $4.99 and it is developed by Mugunth Kumar, a developer that many would know while developing for the iOS as the developer that got his head round the In-App purchases and made them available as MKStoreKit, an open source library for use.

If the aim is to getquick metrics for the app, iKLOC will achieve just that. We also found a bug in the app, though the selection odf the check boxes increases or decreases the count of the Lines, Comments and Semi-colons, the Total filesize just keeps increasing. So, we are sure the developer will fix that in the update soon, and while he is at it, I am sure that he wouldn't mind updating the credits.rtf file that displays the credits in the About this app dialog.

And we have a copy of iKLOC for one lucky winner, all you need to do
1. Follow @whatsin4me
2. Retweet the message "Read reviewme.oz-apps.com, follow @whatsin4me and RT this msg. You might win a copy of #iKLOC from @mugunthkumar"
or
Follow us on Facebook by liking our page at
http://www.facebook.com/pages/ReviewMe/137640632964588
Developer Giveaway Mac App Mac OSX Review Software Store Tool