Ask someone for a suggestion on a note taking software, the unanimous answer that most would com up with is Microsoft OneNote, and it even has the iOS companion software that allows for viewing of the notebooks created. To run One note, I need to run windows, what can I do if I need to run something on my Mac? What are my options here?

Now having been a user of OneNote since it was released in 2003, the bar for Circus Ponies Notebook is set to very high. Though this is not a comparison between two software, it is however to say what features should be present not because they exist in the other, but because it is an important feature. So on starting Notebook, it presents the user with a menu allowing to start a new Notebook of a particular type, these are Templates that can be used, and the pages are populated based on the template chosen. This is a nice touch, but it is confusing, I am used to a blank notebook and I can use it for whatever I want, I could mix and match, so a more appropriate option would be to insert a page of a particular type, more like in a Binder, I can add a Graph Sheet, a ruled sheet and a blank sheet with a sketch on it. 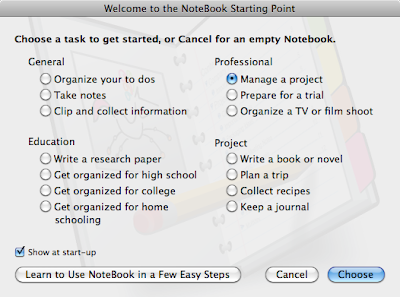 This is helpful and unhelpful at the same time, There is the ability to add a Divider, a Page, a Writing Page and a Cornell Page (Using the Cornell method of note-taking). Dividers are the tabs that are presented on the right side of the window, for easy access. 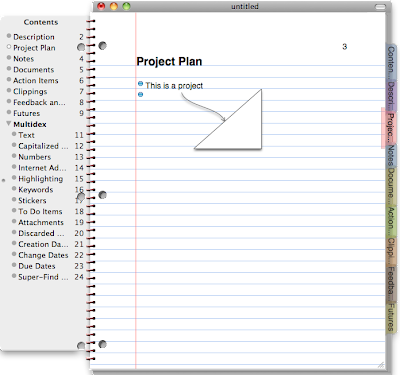 The page can be adorned with other objects like Shapes and Lines, Sticky Notes can be added to the page. In comparison to One Note, adding a line drawing or a voice note or anything other than Text, Shape of a Line is a bit of a task in itself. During testing I found it confusing and it did not record any audio and failed to work. The reason for that perhaps was that I was trying to insert a voice note, where as the option is *only* to annotate an existing note.

To insert handwritten notes, it is required to use the Ink functionality included with the system, This option is not a simple one that is easily found, when a tablet is connected to the mac, this option shows up in the system pane. 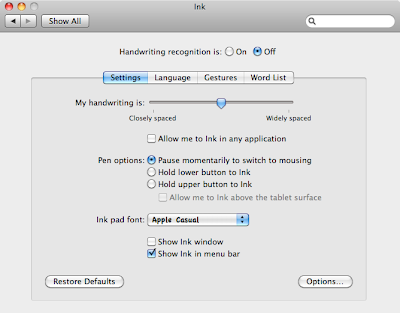 As in one note I am so used to scribbling and annotating the text, etc, when I tried the same in Notebook, it did not work as per my expectations. Dragging the pen to try to scribble, ended up in drawing selection rects on the screen. Ink provides its own window for recognition, and it is a bit *unfriendly* this is one of the things that Microsoft has managed better than Apple.

The developers have also come up with a companion app for the iOS. The iOS version is a bit confusing as well. Probably because of the expectations from having worked with OneNote. The interface is quite cleverly designed, so clever that the average user will find it a bit daunting and confusing. 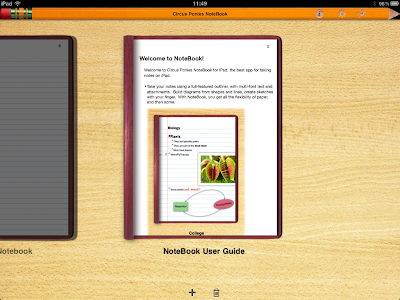 I could not get the iOS version to draw with my finger either, as drawing a line was interpreted as the gesture for next page or previous page. Making voice recordings were comparatively easier than in the desktop version.

There is *no* software on the Mac Platform that helps users in Notetaking similar to One Note. The current method of note taking using a hierarchical list is used by many other software, but the developers have also paid special attention to make it look and feel like a real notebook.

On it's own, not compared to OneNote, the feature list of NoteBook is extensive, and it provides the Note taking metaphor with different styles of paper backgrounds and image backgrounds. Even to the extent of spiral, perfect bound 3-ring or pad binding. 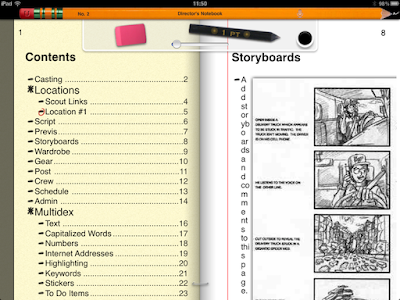 NoteBook features advanced text editing features with an in-built dictionary and auto-completion functionality. It even registers as a service providing clipping services from any other app. Clippings can also be used to interact with, for example a mail send to an email address in the clipping, or the text itself be send as an email. Images, and files can be easily attached to a point in the outline by simply dragging and dropping the file.

The Notebook can be saved as a website locally or published to a site and shared with others. The data stored in the notebook is quite safe, it can be password protected and the data is all encrypted on disk. Action items can be published to iCal and Alrams can be used from iCal.

Shadowed under the feature set of OneNote, this appears to be dwarfed in features, but the reality is that even in the version it is, it is quite a powerful feature laden software. I did mention that the review was a bit biased as it was comparing Notebook based on my experience with OneNote. I have always longed for something on the Mac Platform and this is the closest at this point.

Notebook is celebrating its crystal anniversary, which puts it to be older than OneNote, it has been serving the Apple community with a software to organise everything in one place just like a real Notebook.

So take it out for a spin, choosing either the Mac OS X or the iOS version or both by downloading the 30 day demo version of Notebook for the Mac.

And we have a copy of Notebook for one lucky winner, all you need to do
1. Follow @whatsin4me
2. Retweet the message "Read reviewme.oz-apps.com, follow @whatsin4me and RT this msg. You might win a copy of #NoteBook from @circusponies"
or
Follow us on Facebook by liking our page at
http://www.facebook.com/pages/ReviewMe/137640632964588
Giveaway iOS Mac App Mac OSX Mobile Review Software Store Text Editors Tool Windows