This cannot be forgotten for while

Computer Games are no longer Games, they are now turning into an art form. Just recently a Computer Game Music was nominated for the Grammies and awarded a Grammy. Gone are the days of 8-bit graphics in 2/4 colours with pixellation and colour clashes except for the fact that Retro Gaming is coming back with updated 8-bit graphics in Hi-res and multi-colour. Development had become a difficult task and now with a lot of tools and code generators, development in in the reach of many.

Just because everyone has a pencil and paper, not everyone becomes an artist, but there are the few talented ones that can weave magic with the tools that they have. Here is one from Sungift Games called Forgotten Places - Lost Circus HD. It is their first mobile (iOS) game created with from a port of their Windows Based game. 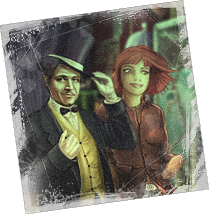 The game is a bit large at about 170+ MB to download, but each byte downloaded is worth the bandwidth, there is about 51MB of Audio and Music and over 130 MB of graphics. The game is well done with cut scenes and atmospheric music, The scenes transition from one to the other quite well, there is good use of panning and zooming to give the illusion of movement rather than a static screen. The UI is quite polished and slick.

On start the game starts like a storybook, with each page illustrated and animated in some way. It gives the feeling of a dark horror themed story where there is suspense and mystery, but the game turns from that to "follow the white tiger cub" and switches from a dark theme to a kids/teens activity game. There are about 50 odd scenes, which transition between the past and the present, the past being coloured and the present, dark shades and in tatters. It has enough gameplay and activity to engage, there are mini games and activities to do. Achieving these let you proceed. For those that get stuck, there is a hint button on the screen which highlight what to do next. Some puzzles are a bit hard to solve not because of the complexity but due to the fact that they are not very clear and clearly requires a zoom mechanism to view the screen. The mini-games do not get repetitive, though most of the games are search for items. The game can be played in either of the two modes, Casual (Easy) or Expert (Difficult).

From a technical point of view, the app uses the Particle Generator for effects like Fireworks at the end, steam in the kitchen, rain and other such effects. They have also used Masks brilliantly with the Coins in the pool level, (something similar should be used for Zooming). Layering the scenes *could* have been done with XML or something similar where the objects on the screen are laid out like in a compositing program. This allows for the objects to be removed on click. I did not go through the game a second time so not sure if the puzzles are the same or are they generated on the fly. We tried to keep the fact that the game was made in CoronaSDK till about this point, and it can be seen that some very good quality games can be made with CoronaSDK which are not just hobbyist but mainstream.

I tried an adventure game like 1112 and though it might have been touted as the most beautiful, etc I could not get very far (maybe it is me) but on Forgotten Places, it was easier, the hints were good enough to help through the first few levels to get a grip on the gameplay.

This is perhaps one of the most beautiful adventure games made that are playable and not too difficult and we hope that this is the first of many more to come.

And we have a couple of copies of Forgotten Places for some lucky winners, all you need to do