Mobile devices are now becoming increasingly critical for modern living. It all started with Mobile Phones, prior to Mobile Phones there was no imminent requirement to remember anybody's phone number, the phone diary usually kept near the home phones were good enough,. With Mobile phones, suddenly the number of numbers just increased and made our senses number (sorry, could not resist the three 'number') With the phones having the capacity to store phone numbers, then addresses and extra notes removed what ever little reliance there was on our brains.

I felt a feeling of DejaVu and realised that I had a similar start for one of my earlier reviews of mSecure. This is what I am talking about, if there is something that we do not know or need to know, it is as simple as googling it or binging it. We use our mind on other activities. However with the modern living the other issues that I have is the number of cards or information that I have to carry on me. As they say I need atleast 100 points of ID on my at all times. Which would mean a drivers licenese, a bank key card (Debit/ATM Card) and another card like a student/staff card, a credit card. Then I have a couple of banks that I bank with and each have for security their own systems, and most of them rely on tokens based on RSA that keep generating a random number every so often. Then each website has a password, and in an attempt to keep the passwords different from my main login passwords, I keep forgetting what I used, So it is usually resetting the password every so often.

So to a large extent, Tap Forms would seem like another version of an app that manages an eWallet. This is where the assumption would be wrong. Tap Forms advertises itself as a Mobile Database and on closer look, beyond the eWallet capabilities, it is an unstructured database and it offers connectivity options via running a webserver on the iOS device or syncing with DropBox.

The best part of Tap Forms is that one can create a new form and the form can have any amount of fields, so a CreditCard form does not have to be similar to the Passport Form, where generally in most apps data has to be *fitted* into fields to manage the form. For a vehicle there is a field for VIN and a custom form for Blood Type. Out of the box, the app comes with several commonly used forms and allows the user to create new forms.

The app is available in two flavours, the Normal (iPhones/iPod Touch) and the HD (iPad) version. We got to try out both the versions, The iPad version is an amazing treat mainly for the largish screen and spaced out options.

This provides quite a good amount of flexibility. The developer has also included the functionality to upload a CSV file with the data to be uploaded as a form/series of forms. Some amazingly well added fields are the Location which spawns a map from which the location can be selected and the Audio Recording which literally incorporates a voice recorder in the app.

Testing the app was done with simple data and by creating a few normal records and the software responded well, unfortunately there was no way that we could test the stability by batching the addition of 1000's of records and then checking the performance.

There is an option to enable the Passcode to protect the data from prying eyes and the data can be encrypted with AES-256 bit encryption. So Tap Forms can save the data if there is a need. So one need not worry about the possibilities of all data like bank accounts, credit cards, etc being exposed to a stranger/ worse a thief.

From a functional and esthetic point of view, Tap Form is a wonderful software that is created taking into consideration the different types of fields that one might require for their databases on the mobile. Some other apps try to provide database functionality, but either have a very busy screen giving a feeling of complexity, where as Tap Forms with the simple clean UI is not only easy to use but also easy on the mind to work with.

this could be a form for handling electronics receipts and reconciling if they were paid or not, another field can be added that has reconciliation data.

The possibilities are endless and limited to the memory on the device. With the functionality to save/export data to dropbox, the data can be on the cloud.
Priced at $6.99 and $8.99, they are very reasonable and offer the best options on the iOS devices as of now. 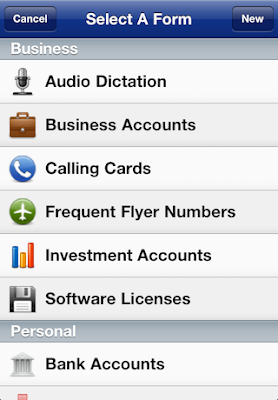 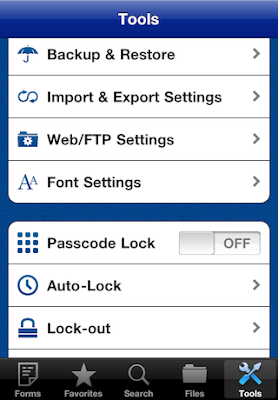 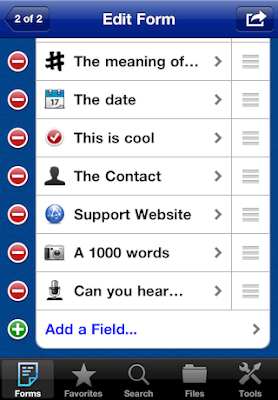 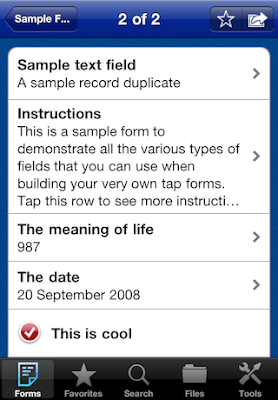 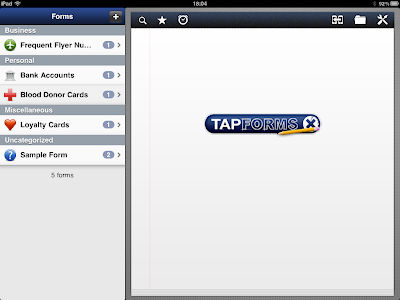 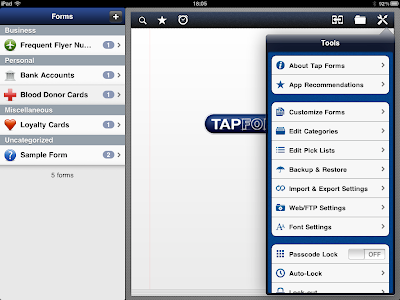 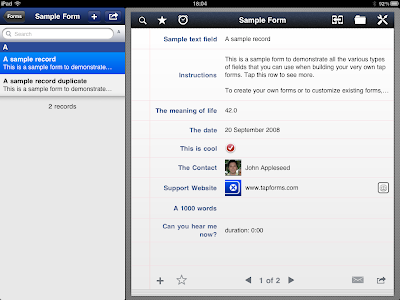 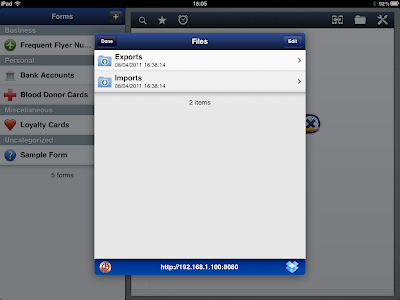 And we have a few copies (standard and HD) of TapForm for our readers, all you need to do
1. Follow @whatsin4me
2. Retweet the message "Read reviewme.oz-apps.com, follow @whatsin4me and RT this msg. You might win a copy of #TapForm from #ClickSpace"
or
Follow us on Facebook by liking our page at
http://www.facebook.com/pages/ReviewMe/137640632964588
Developer Giveaway iOS Mobile Review Software Tool