A Social message packed in a multimedia experience

"I do not feel that I can do that". "Oh, he is so talented, wish I had half the talent that he had". "I think my nose makes me look a bit awkward". These are some of the things most commonly heard from teens and this is not just the lack of self-confidence but the start of a whole lot of issues that lead to depression, crime, rage, and so no. Now, I am not a Psychologist but having gone through some insecurities myself know the impact of these issues. To add to that if there is Bullying involved, it just makes matters worse.

Annie Fox, the Author of the award-winning Middle School Confidential series has with the help of Electric Eggplant released (due for approval from Apple anytime now) the iPad animated comic book version of the same. Annie is a well known person working with children in this area. She founded the "Cruel's not cool!" website that is a forum for anti-bullying aimed at students, parents and teachers. She is also known as "Hey Terra" since 1997 where she has been answering questions online. Add to this, an artist that loves his work, Matt Kindt, nominated for four Eisner Awards and three Harvey Awards. Finally, complete the concoction, David Fox, one of the original members of Lucasfilm Games (now LucasArts) working with CoronaSDK is such a lovely combination that it creates nothing short of a wonder.

There are several writers that have written on the social themes, some have even tried to create comic book series out of it to enable "Easy Reading". I have been a comic book fan since I was a kid and at the time, I grew up on the influences of MAD, Harvey Comics (Huey, Lota, Little Dot, Richie Rich, Hot Stuff, Wendy, Casper, the lot) Archies and the lot of DC (Spiderman, Superman, super heroes) The difference that I find in the comics in those times and today is the graphics and the colouring. The colouring in Photoshop adds a depth of realism, but personally, it overloads my brain and I am unable to read it further. It is just too busy and loud. I still prefer the muted tones used in the older comics, the slightly yellowing paper and lots and lots of shading (in DC Comics) or the bright feel in the others. Be confident is drawn and painted by hand (watercolours) and hence it also appeals to me personally, it is light and helps to retain the information.

The app is created in CoronaSDK. CoronaSDK has a comic book sample template for use with comic books, so what is so great, one might ask. A lot, David has created an extra layer of Oomph on top of the sample template. There is 9 MB of Sound and music to accompany the book, it is so well integrated that unless one looks for it, one could be totally oblivious to it being present.

The Comic book App works only on the iPad at the moment and it has two modes, one where the entire page is presented or the panel by panel zoomed in view. At either view, the text is crisp and readable, the trick is in the way it has been deployed, the text bubbles are overlaid on the panels. this is a painstaking task, where each co-ordinate and panel is aligned to provide the best reading experience. The structure of the comic book is well balanced, the story line revolves around a group of 6 kids each with their own issues. The entire story is split into 8 chapters with about 43 pages of story. 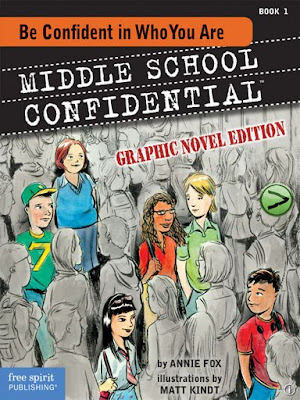 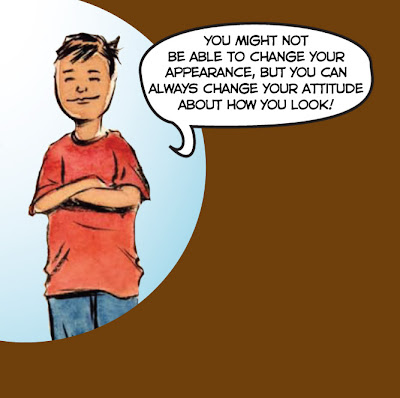 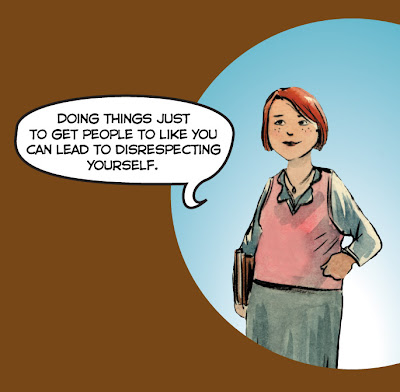 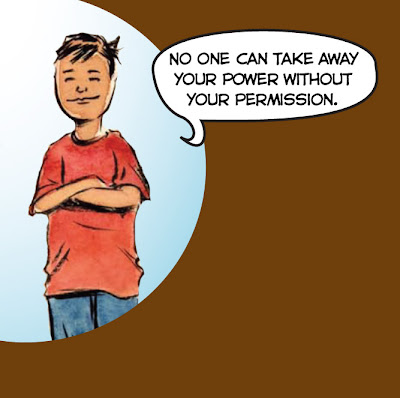 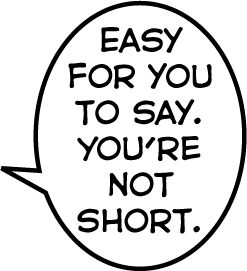 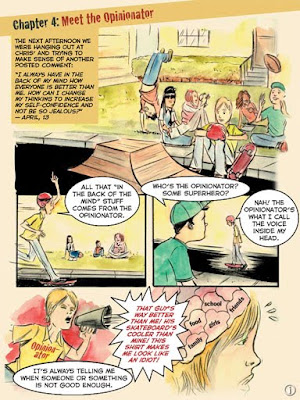 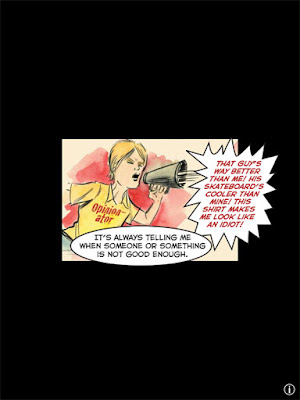 This is definitely pushing the CoronaSDK engine for comic books, with more titles in print, this shall not be the last of the comic books for the iOS devices from Electric Eggplant.

I actually spend time reading through the entire book, it does not really matter about the role that I have in life at this moment. It serves to educate the reader, mostly things that we would know, but sometimes it helps to understand how to deal with anyone that would be undergoing any such issues.

On a separate note, I had a chance to read the BlackDog books, for those that would have no idea of the same, "Black Dog" is used as a metaphor for depression, those books were an amazing series to explain the feeling and reactions of people suffering with depression. It makes one a bit more understanding and tolerant in their dealings and provides a way to help/deal with the ones suffering. Be Confident series is good illustrated guide for understand and helping kids with self confidence and esteem issues.

And we have a copy of Be confident for one lucky winner, all you need to do
1. Follow @whatsin4me
2. Retweet the message "Read reviewme.oz-apps.com, follow @whatsin4me and RT this msg. You might win a copy of #BeConfident from @ElectrcEggplant"
Book Giveaway iOS Learning Pre-release Review Software