How do you distribute your software

Spending numerous years creating software for Windows had me accustomed to using tools that came with VB or VC, generally ending up in a series of files including the setup.exe. This was the standard accepted format for distributing windows software, till Microsoft introduced the msi format of Windows Installer.. Fast Forward a few years, I moved over to the Mac and started developing software for the iOS, so no issues with distribution.

When I started to develop some apps for the Mac OS X, not with the intention of uploading it for sale on the Mac App store, I was faced with the dilemma, How do I distribute the software? The main issue being that many zip the app file and just leave it for download. Some others place it into a DMG file and allow it for downloads. What was the right way? When I downloaded the dmg for Firefox, Skype, Chrome, etc they were all beautifully branded and on mounting the DMG file, the drive icon had the Branding of the application, on opening the folder, it had this beautiful background image that explained what to do. It had the icon of the application and a shortcut to Applications, the instructions mention that the applications should be dragged onto the shortcut, that's all that is required to install.

I found an app that helped me create custom DMGs of my app, after which I could see so many apps that worked with DMG's. So when a copy of DropDMG arrived in the InBox, it had competition in the form of a Free App that was used.

DropDMG has been around for quite a while, so there are more features in there than stuffing in a teddy bear. This is a good thing and not such a good thing. It is almost like Visual Studio or xCode4, for someone starting new, it can be a wonderful experience or a nightmare.

DropDMG is based on the concept of Configurations. What is that, exactly that was my reaction the first time I started it up. Plus the app cannot do anything if a configuration isn't setup. A configuration in very simple terms explains what the format of the DMG is, what type of encryption would one use, the license, layout, options can all be setup here. 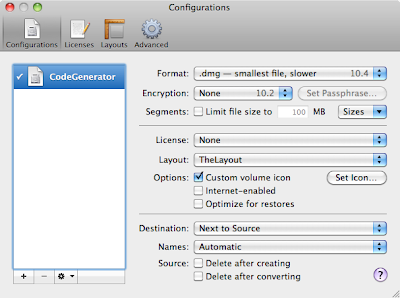 While a configuration is setup, a Layout can also be created. This is what the user would see when they mount the DMG. Here's an example of CoronaCodeGenerator Layout (though the distributed version was using another applications) 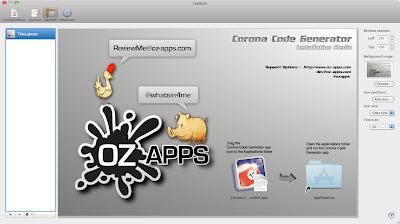 DropDMG goes beyond the simple DMG creator, it allows for burning the DMG to a CD/DVD (Generally with the DMG being small other than the ones for xCode, why would one want to burn it to DVD?) the DMG can be mounted or verified. It also has some Disk Utilities type of features that allow for creating a blank DMG, or converting a DMG.

One feature of DropDMG that is not very commonly used or known is that the entire HardDisk can be cloned and this is compatible with Disk Utility and Apple Software Restore.

DropDMG is as stated at the start of the review, has a multitude of features, however we feel that the Interface requires a revamp. It should be a bit more Apple-y (Easy to use by any and every one) The features to work with the DMG like Mounting, verifying and creating, etc are on the toolbar, where as the Configuration is in preferences. If someone just wanted to create a DMG and get done with it, the learning curve would drive them away from a wonderful application.

For everyone that would like to develop Mac Apps and distribute them on your websites not via the Mac App Store, need to create a DMG and DropDMG is a good option.

And we have a copy of DropDMG for one lucky winner, all you need to do
1. Follow @whatsin4me
2. Retweet the message "Read reviewme.oz-apps.com, follow @whatsin4me and RT this msg. You might win a copy of #DropDMG from #C-Command"
Developer Development Giveaway Mac App Mac OSX Review Software Tool