How did you write it wrong?

When I was in school, computers were not a common occurrence and there were very few households that had a computer. I still remember having the ZX Spectrum that had a 32 column display where as the PC's had a 80 column display. I had spend endless hours trying to design on the backside of Computer stationery a database app that would draw a nice box border on screen and a menu to allow the organisation where my dad worked manage things better. There was nothing better than designing and dry running on paper.

Gone are those days, now computers are present in practically every household, and more than one in some. It is interesting to see what everybody uses the computers for? Be it Unix, Windows or a Mac, the most common use is writing. Humans have been intrigued with the inherent need to communicate, tablets, papyrus and now computers. The simplest of them all apps is VI for *nix, Notepad for windows and TextEdit for Mac OS X. Still as a developer, these are not adequate and there is a lot left to be desired, VI is an exception while it has modules for Syntax Highlighting and other features, it is a Programmers Editor, not something that everyone can use.

BareBones Software have had a product for quite a while catering to the requirements of developers, writers, anyone with a mac and wanting to write. However it seems that BBEdit is more biased towards being a HTML editor and a Developers Editor that has syntax highlighting for a lot of languages.

There are many features that are available in BBEdit, and the average user might use only about 60% of them, or for that matter even be aware that they exist. For instance It can open files from the hard disk and also remotely off ftp and sftp (SSH) servers. It can also work with CVS and SVN repositories including the functionality to Check-in and Check-Out the files from the repositories and compare revisions. It can also run, record, oraganise scripts. It has a built-in clippings manager that manages clippings which can be inserted as code and Text Factories. Text Factorties are set of rules set up to manipulate text for a desired output. It can also open counterparts, so if the main.m file is opened, it can automatically open main.h. 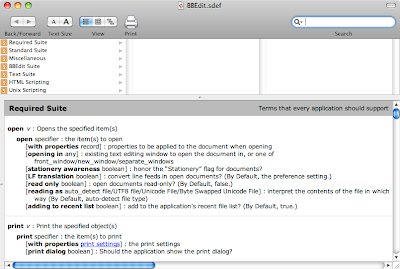 The Scripting Dictionary allows for creating scripts (macros) that can be used to automate certain tasks and can also be recorded via the menu if writing a script is difficult.

BBEdit aims at providing a project management experience where all the assets are collated together as a Collection (Group) Add to this the features of working with Online repositories and remote files. It takes care of everything.

The search functionality is literally search on steroids, that allow for a whole range of search capabilities including live search and using selection for find or replace. It even offer search and replace for multiple files. This functionality was just short of refactor, if it could also rename the classes to the new name like refactor does, this would be gold.

There is the standard Auto completion that is now expected from most text editors that have syntax highlighting and also has a scratchpad window. Another feature that is really interesting is the preview in Browser that shows all browsers and even works with Windows Browsers running in a virtual machine. However It was strange to find VLC 1.1.8 listed as a browser.

For a serious developer, a writer, anyone that need to write, cannot go wrong with this.