All the digital bits flow around your screen

There were many instances while I was teaching the students about Unix and Linux, that I wanted to show them more than just a screenshot. At first running a windows box was not very helpful, then remote logging into a unix server setup specially for the students running a very lean server with most services taken off. So I had to bring in my own Macbook Pro to demonstrate some Linux stuff. The other alternative could have been a Linux Live distro running off the CD in the windows box.
The point here was not about running a linux distro but the situation that most of us find ourselves in where the case to share the screen, not just the screen shot but a series of them to illustrate how something works or to highlight errors, etc As a developer the need to demo some software, screencast a particular issue, etc. This is a very common scenario that an average user is faced with in day to day life.

Telestream have brought to the market to resolve these issues Screenflow. Screenflow is an app that has won several awards in 2008 and 2009. The software has been upgraded to the latest version of 2.1.7 which is 64-bit compatible and runs well with the new Snow Leopard system. The core of the software has not been left behind and now contains tonnes of features to create the screencast, demo of choice.

Screenflow is the pre and post-production software for screen capture videos. This is one of the very few software that display on screen the key sequences pressed. So that in a demo the user is not left figuring how something was accomplished. It adds visualization to the mouse clicks, be it right or left. On start Screenflow seems as if there is no interface whatsoever, it just prompts the user with a simple form that allows for selection of the Audio and Video sources and a record button. The Desktop can be hidden when recording to remove the clutter of all the icons.
The software gives the user a countdown time to get prepared with the capture and count downs from 5 (changeable via the preferences) 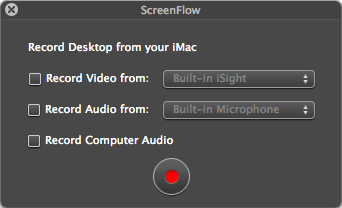 When I started Screenflow for the first time and made a test capture, I was presented with the full screen captured and presented. This was a bit disappointing as on a 27" mac, the window I was trying to capture would have been a small one not the full 2650x1440 resolution. In some other capture apps, I would be able to choose the area of the screen that I want to capture. I would enlarge the video by scaling the area to a higher magnification and then save the video at a reduced size...Till I realised that there was a crop option right in front of my eyes on the screen. 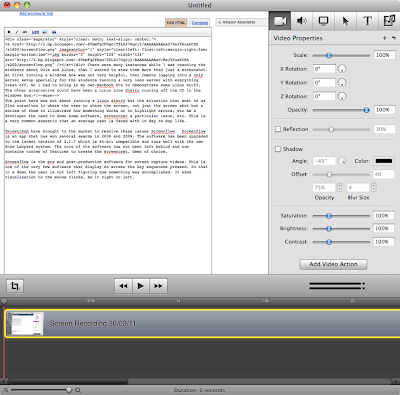 The few things that can help work on the screen captures are on the right hand side of the windows, options like
Video Actions These allow the scaling and rotation of the screen capture and additions like reflection, shadow or recolouring

Audio actions These set the audio properties that allow for increasing or decreasing the volume and even allows for adding sound FX.

Screen Recording These allow for fine tuning the recording and provide options like increasing the size of the pointer, introduce click effects, or add a clicking sound on mouse clicks and to show the keys pressed.

Callouts can be added, callouts are a way to draw attention to a particular area of the screen either the Mouse Pointer or the foreground window, where the rest of the screen is darkened.

Text boxes These are used to place text on the screen as captions and can be customised with Font, Color ,Alignment and Backdrop

The feature list is not limited to these listed above, a thorough read of the features can be found on the website.

After having gone through the entire presentation adding or editing as required, the next step is to save it as a usable file. There is the functionality to publish to YouTube or as a Flash movie in one go.

However for a custom output, the export function brings up several options for saving. Upon clicking export the output file is created which can then be added to a CD-ROM/HDD based project, a presentation, posted on some website/podcast/blog.

It is perhaps the simplicity of the UI and the software combined with the powerful editing features that make this software one of the most popular software for screencasting.

If you are looking for screencasting, there are quite a few software that available in both the Free and paid flavours, definitely the paid ones have some extras to offer in comparison to the Free versions, but amongst the paid verions, Screenflow is definitely one of the top 3 offerings. The advantage of capturing the full screen is that it relieves the user of recapturing the screen again at a later time. If the user need to display some other portion of the screen, it is already captured, the user just has to pan the screen to display the area of interest.

For an eLearning type scenario, where the key strokes and mouse clicks are as important as the screencast and the presenter video, then Screenflow is the solution.

And we have a copy of Screenflow for one lucky winner, all you need to do
1. Follow @whatsin4me
2. Retweet the message "Read reviewme.oz-apps.com, follow @whatsin4me and RT this msg. You might win a copy of #Screenflow from @screenflow"
Developer Giveaway Mac App Mac OSX Review Software Store System Ther Tool