Yo! Here is something cool for you Jimbo...

As a developer, I have always been fascinated with how Databases work, when I started off with dBase III it ran off two floppy disks (360K 5.25" ones) and each machine had to have two floppy drives to run the program or swap the floppies to get it to work. Still when it worked, it offered quite good storage capacity, all of the remaining space on the Floppy disk.

Then as GUI based environments became popular, namely Windows 95, there was a lot of talk about unstructured databases, it is such a cool concept where data can be in any format but all of it forms one large database and can be searched upon. The internet is one such example in today's context, but on the desktop, along with many other users, I too have been searching for such an offering. There aren't many that allow such functionality, for those that know about Ontologies, I even went to the extent of trying to create dynamic linking between data based on data descriptors, but ...

We do not get the luxury to spend a lot of time on something, specially if it is not in the main field of our work. My quest for such a product never ceased, then came the little PIM/eWallet type apps for iOS devices that were specific at managing certain types of data, mainly card information that one carries in the wallet. Credit Cards, Loyalty Cards, ATM Cards, ID Cards, etc. My wallet is bursting to the seams due to the number of cards in it. From a time when my wallet used to have actual cash, now I have everything but cash in my wallet. Back to track on un-structured databases. It is indeed difficult not impossible to have such an app. 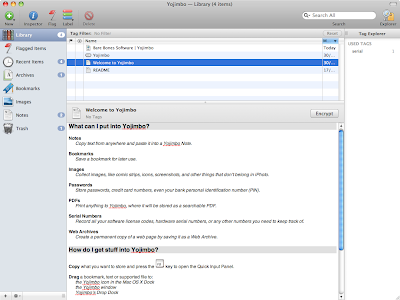 I got an email from BareBones Software with a license for YoJimbo, The name was kind of strange, but after I had seen the introductory video of YoJimbo I was looking forward to the software. It was an interesting concept, it allowed managing data like in a scrapbook. Any and every data could be placed in here. At one point of time, when I was more Academia inclined, I had to deal with a lot of PDF files and they were everywhere on my system, it was next to impossible to get a handle on them. till I read a tip somewhere that mentioned that iTunes is the best organiser for pdf files. OK, but then what about my other files? I used to use a Delicious plug-in for FF when there were two issues, 1. I realised that it was not private (nothing to worry there about the type of links I was saving) and 2. when I lost my password, it was just too difficult to log-in and reset my password, so I gave it up. For my username and some other details, I tried a couple of other software, for images, I had iPhoto and Picassa, but see on my MacBookPro I was running out of space, it wasn't like the iMac now, where I had large amounts of space.

So Yojimbo, seemed to be the silver bullet, a one size fit all and at the same time easy to use. So here's my experience with Yojimbo. On starting up yojimbo, there was the main window that opened up and on the right had side of the screen a tab popped out from the center with the nae Yojimbo. This is the quick access bar, instead of the MenuBar icons that most software add, Yojimbo has this side bar tag. On clicking it, it reveals the Library and the flagged items, it will display other groups as created. This is called the Drop Dock and under preferences it can be positioned in any of the eight areas around the edge of the screen or choose not to display it at all.

Yojimbo can be activated via a shortcut key (all documentation keeps mentioning it as F8, which is mapped to the system Play Pause key, so I had to change mine to another combination) at any point to create a new entry, It's called the "Quick Input Panel" this takes the text present on the clipboard and allows for creating a new item, the type of item can be chosen and the entry template changes accordingly.

I tried to drag drop a few files from my system onto the interface, yojimbo created new entries for these file and stores them in its proprietary format. With the entries in a binary plists format. I could not locate the data files, I think they are stored in the same binary plist along with a cache.db file.

Yojimbo allows creation of different types of entries, starting from a Note,A Bookmark, Images, Password, Serial Number, Web Archive, Collection, and a Tag Collection. Most of them are self explanatory the interesting item is Web Archive, it is a snapshot of the website cached for use in offline mode. This does have its limitations, It fails in caching sites that require log-ins like Facebook pages and flash animations. 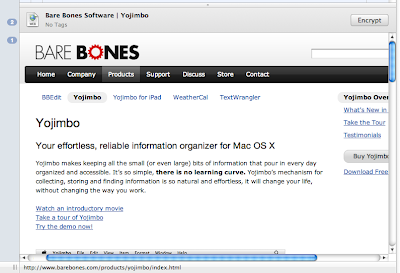 I did not go into detail for this because all of this is kind of standard and many other software do similar things up to an extent, Yojimbo does them better, but it is still kind of common across these software types.

What Yojimbo does that others do not is the functionality of SideKick, it offers all the data stored in Yojimbo to be accessible via a browser. It even includes a search bar and it is quite fast and self sufficient. I could not figure out how to browse that data using the browser as I did not get the address to go to, but from the hard disk launching the index.html file gave me an idea of what it looks like and It was impressive. 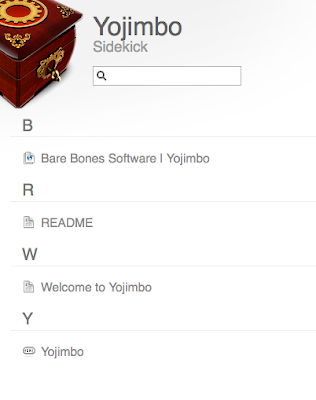 Yojimbo also has an iPad version that is a reader for the Desktop version data. Essentially if the data is synched with the iPad version, it can be taken anywhere and viewed, this is an amazingly useful feature, the biggest issue with iPad is transporting data files. If all the data can be organised on the desktop and synched, the iPad is an amazing tool with all information as required.

There are other features like Print to Yojimbo which is available to create a PDF of the document and import to Yojimbo.

From the point of view of an unstructured Database, we haven't reached there yet, this is still a better option that is the closet that we could reach at this point of time.

As of this point, we have not been able to test the iPad version of Yojimbo, if we do get a chance to do so, we will feature that as another review.

Update: This contest has closed and our winner has been informed.
Giveaway Mac App Mac OSX Review Software Store Tool