On the move - In the groove

It is but a wonder when we complain about not having enough hours in a day do we realise how many hours we could have saved or used. Many might not be necessarily lucky and do not really waste a lot of time in travel. I do not have long commutes, I do not have to waste hours traveling, but on occasion when I have to travel interstate, I do face the issue of mobility. This last time that I had to travel, rather than lugging my laptop, I tried carrying my iPad to make it easier through the Airports and to carry little and lighter hand baggage.

I am not sure why, when I purchased my iPad I purchased a WiFi model only (I guess the main reasons were the price and the fact that most of the places that I used it in was WiFi Connected) Now when I have to travel, I am faced with the issue of connectivity. Well, putting that aside, can I work on the things that I have? Like my code, my reviews, my game, my projects, etc? Alas no!! I cannot work on my code as there is no xCode for iPad, and some other SDK's that I work on do not have an iPad IDE. Wordpress has an iOS editor but I use Blogger, There are some project management tools that work on iPads but are wither too expensive or are not feature rich to use.

Despite the given shortcomings, I have been trying to read and look at code using a few text readers or editors. I must admit that they are rather difficult to work with. Knowing how important it is to work on source code with syntax highlighting, and the ability to transfer files to a remote source or check in into a repository apart from the development workstaion, I was on the look out for a good text editor.

When we got a copy of Textastic, from http://www.textasticapp.com/ it was the turning point, Here I was looking at a software that could do the list of things and here was a software that said it could.

First Impressions
The screen is split into two sections, the files list and the text editor. The Text Editor has not only Syntax Highlighting but also line numbers. It was easy to understand that the + button would mean adding a new file and I created a new file, a sample code in Lua. It highlighted the Lua keywords as expected, but it would be nice if this could be expanded to cater for more syntax bundles. 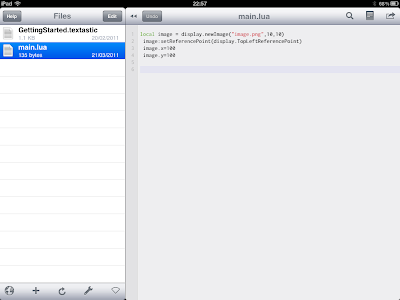 Syntax highlighting supports over 80 formats (87 to be precise on the version we reviewed) This means that the app can handle almost any file format thrown at it. It supports all major languages like C, C++,C#, VB.Net, ASP.NET. PHP, Pyhton, ActionScript, PAscal, Java, JavaScript, it even supports Fortran, Cobol and ASM. It is a versitile editor for a range of professionals that work with text files, so a WebDesigner can work on PHP, HTML, CSS, ASP, JavaScript, JSP, etc A developer on the programming languages, a Scientist on Matlab, Haskell, Prolog, etc, System Admins on the Apace files (conf, htaccess), Batch, Shell Scripts, Perl, Python, Ruby, etc In short a lot of horizontal sectors. 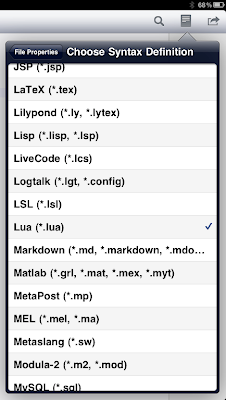 This is half the battle won, with this feature of Syntax Highlighting text editing on the iPad suddenly became more easy and congenial. The file can be send to a colleague via email as the message or as an attachment by just clicking the action button on the top right hand corner of the screen. 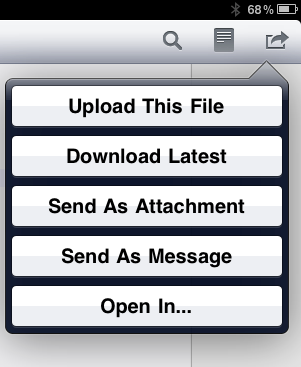 A Closer Look
So far if I was not connected, I could manage to at least review and write some code using textastic saving it on to the storage on the local device. On the UI, underneath the files list are buttons. The first one that looks like an earth (which I presume represents the Internet or network). So clicking on it, flipped the screen vertically to reval the *other* side that looked vaguely familiar to the "Commander" type software, where there are two sections, one being the local files and the other a variety of destinations to choose from, allowing for transfers between the two panes. While reviewing the software I used SFTP (SSH) and connected to my Desktop iMac. The process of transfer was simple, select the files/folders and click the download button, the files get transferred. Transfers can be made in either direction, Uploads is equally simple, select the files to be uploaded and just click on upload, done. Going back is a little treat to the flipping screen again. 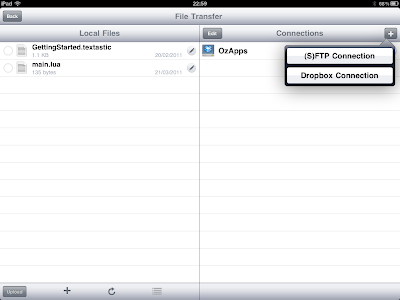 Apart from the FTP/SFTP options, Textastic offers for DropBox connectivity. This is such a wonderful option, as it not only allows for uploading files to the cloud, but if set with the desktop version, it will synch the files with the desktop. So the moment the files are uploaded, they are already there on the desktop (if switched on and connected) 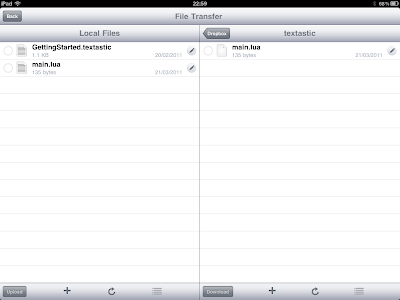 Could you believe that?
The other buttons are for Adding new files, Refreshing the list of files (it is generally not required), preferences that allow for setting the font, font size and other settings relating to the editor.

The last button allows running of a WebDAV server on the iPad to transfer files off the iPad using a WebBrowser or a WebDAV client that can mount the directory as a folder. It also integrates with TextExpander (required to be purchased separately).

The webDAV server option is the cherry on the icing for access from public access / shared machines or when accessing a file from a fiend/colleague's computer. It eliminates the traditional method of emailing the files. 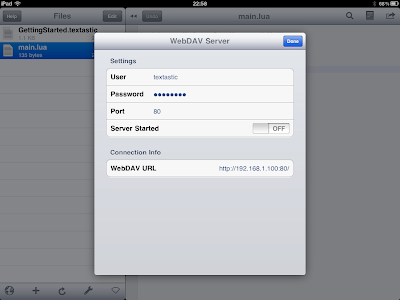 Keying in code/text is not a difficult task on Textastic, it supports all dock and Bluetooth hardware keyboards but the onscreen keyboard has been specifically extended to have an extra row on top of the keyboard that has the frequently used symbols like the Brackets, Curly Brackets, Square Brackets, the Angle Brackets, etc. This makes typing code so much easier. 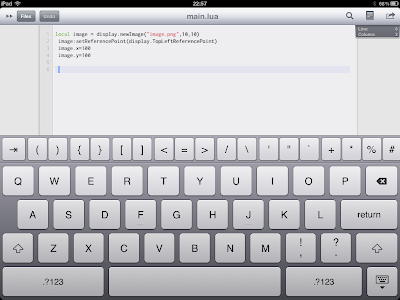 Textastic is a clear winner, an application that allows productivity even on the bus or train where it might be an overkill carrying a laptop. Not only does it make the iPad more useable as a developer tool but also provide the developer with the facility to work from a device such as the iPad. It is also included in our list of essentials found at http://reviewme.oz-apps.com/p/essentials-pack.html

When the software has nearly everything, there is not much that users can ask for. Hence the first thing that stood out was printing support, the apparent lack of it.
The other being the ability to set up custom syntax highlighting and themes. These are not very critical but would be a nice thing to have.

The presence of Textexpander *could* signal the possibility of other plug-in apps, given that iPad2 has a better processor and could sun apps in the background.

And we have a copy of Textastic for one lucky winner, all you need to do
1. Follow @whatsin4me
2. Retweet the message "Read reviewme.oz-apps.com, follow @whatsin4me and RT this msg. You could win a copy of @Textastic from #AlexanderBlach"
Developer Development Giveaway iOS Mobile Review Software Text Editors Tool