No iOS is an Island anymore

I use my iPhone or the iPad to take pictures, (when I say pictures, iPad2 has a camera but the iPad did not, I mean screenshots) The biggest problem that I have faced and am sure that plenty of you might have faced too is how to get the images over from the device to the Mac/PC?

Now iPhoto is a good sync app, but I do not want to sync with iPhoto, I just do not want to use iPhoto (That's me) So I had to use the second best thing that I could do, pull the images off the device using a tool that let me browse the device in the raw mode. Not an option for everyone, plus even I had a bit of an issue with using this method (for some other article).

From TouchByte GmbH comes an app that makes this process all so easy than anyone can use it. PhotoSync, is a two part app, a Client and a Server, this can be between two iOS devices, an iOS device and a Desktop/Laptop. The companion app for the Mac/PC is available for free from the PhotoSync website at www.photosync-app.com. (For those with Linux Boxes, I have not tried the Windows Companion software running on wine, however for Linux, the easiest way would be to use the webserver mode)

The beauty of this app is the simplicity of use, it is one of the easiest ways to transfer images between two iOS devices or from an iOS device to a desktop, apart from the cool beautiful UI. Transferring an image involves a few taps, tap and select the image you want to transfer, tap on the sync button, tap on the send selected, tap on the devices recognised by the software. I tried it with the desktop companion software for the Mac and the transfers were almost instantaneous, I took a few screenshots from the iPad (earlier i would email them to myself to retrieve the images from the mailbox on the Mac) now it was instant and so easy to transfer the images. 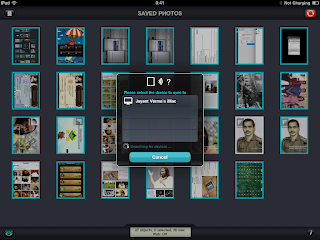 PhotoSync Companion software is Free, but the iOS app is $1.99 it is one of the best investments that anyone would ever make, specially if the work involves working with images and transferring images between the devices. No man is an island, but Apple have made the iSO devices like one when it comes to Photos.

On the Desktop/Laptop, a folder is created for each device that you sync with the Companion Software, so all the downloads are separate and do not get mixed or overwritten. 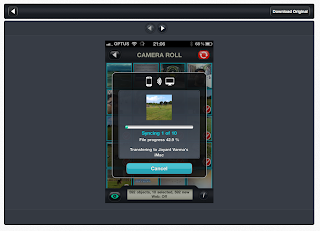 Photosync is seriously feature packed and for the times when one is unable to install software on to a machine like let's say at a friends computer or at a public access machine, the simplest solution is to set up the internal webserver on PhotoSync and download the files. The interface is similar to the one on the iOS devies, so there is no new learning curve.

And did I mention, that there are no limits on the number of transfers between the iOS and the other device. It generally works on the WiFi network, but if you do not have Wifi, it can also fall back on to Bluetooth. This is the Photo Tranfer app that Apple did not include. Reminds me of the Obex transfers over Bluetooth or IR in Mobile Phones.

There are a couple of other alternatives that attempt to provide similar services, but PhotoSync beats em all in terms of usage, price and functionality. If one is serious about their pictures, then look no further than PhotoSync.

And we have a copy of PhotoSync for one lucky winner, all you need to do
1. Follow @whatsin4me
2. Retweet the message "Read reviewme.oz-apps.com, follow @whatsin4me and RT this msg. You might win a copy of #PhotoSync from @Photosync_app"
Giveaway iOS Mac OSX Review Software Tool Windows