CoronaSDK has empowered a lot of users and made developers of designers, freeing them up from the nuances of the heavy lifting in languages like C++ and Objective-C or Java. This article is not about CoronaSDK but about a game written using the framework. Robot 99 - Robots falling out of the sky...
Robot 99 is a game created by Keng-Fu Chu, From the start of the game to the gameplay, the experience is quite polished it is hard to believe that this is the first time effort from Fu, he is Über talented, the artwork is in itself worth the money spent on the game. The graphics are retina ready and hence show up quite crisp.

There are some features that take their roots from Flash but look great when employed on the iOS platform, the tips in a circle look amazing and are used very well. The most important feature of the game that is in plain sight but yet remains hidden from all is the multi-player functionality. It would be rather difficult to try that with the iPhone or the iPod, but on the iPad it is so much fun collaborating with other family members or friends.

The game splash screen is a beautiful graphic, I am sure that if these were released as wallpaper, it would be picked up by many users. On starting the game, the options screen is split in three portions which display a "How To" video, the Leaderboards and a scrollable section that allows selection of levels.

The first and only level available at the start is the Factory (Easy mode) A number of robots have to be rescued before unlocking the other levels. This is might be called Easy but is quite deceptive and does get quite hard. I managed to (by fluke) get over 2000 points as I learned a trick accidentally while looking at the construction of the game (If you have been a developer for long, you can see an app and know what could have been done to achieve a particular thing) so clicking on the Robot increased points and thereby increased the overall score faster.

With the multi-touch functionality, keep several Robots held in the Powerizona for higher scores, as said earlier each time the game is played, there is a new learning on how to score. I loved this game best on the iPad (i guess that was how it was intended to be played by the developer) When several Robots are held together the time and release can be managed, but when they crash into each other and are scrolled away by the conveyer belt, a life is lost.

The game is simple, robots keep falling out of the skies (wonder what they were doing there in the first place) if tapped, they engage a parachute, at the bottom of the screen is a conveyer belt that keeps scrolling objects out. Near the top of the screen is the Powerizona a bar which thrusts a robot giving it speed and points, but this Robot can knock off other robots that are still falling. The type of Robots in the game are varied and it is difficult to really marvel at the lovely art, the gameplay gets so frantic at a point that the choice is look at the robot and lose a life or disregard and keep playing. The game is forgiving and allows for three Robots to be lost to the conveyor belt, and immediately provides a First Aid Robot, that brings back a life.

One can either watch the lovely graphics on a retina display or play the game and unlock more levels. I wish there was a Robot browser that one could flick through and see all the Robots available.

The gameplay is just that simple, save the robots and do not lose them to the conveyor belt. Give the game a Powerizona and see how it goes. It can be found over at http://itunes.apple.com/us/app/robot-99/id414517274?mt=8 for $1.99

A small tip, the website http://www.fu-design.com/ is another self containing world of robots and flash animations, enough to keep you occupied.

The app was made with the differences between the iPad and the iPhone in mind, the layout and the elements available on the iPad are slightly different than on the iPhone. 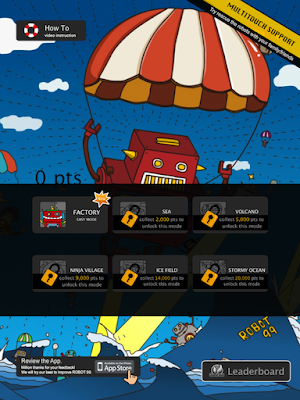 And we are trying to get a copy of Robot 99 for one lucky winner, all you need to do
1. Follow @whatsin4me
2. Retweet the message "Read reviewme.oz-apps.com, follow @whatsin4me and RT this msg. You might win a copy of #ROBOT99 from #FU"

We have been informed that when Fu gets a new version on the iTunes Store we could get some giveaway codes, so let us know and we shall try to get you some Promo Codes to try Robot 99.

A small imperfection shows much more on a flawless piece of art than on a badly done art. Robots 99 is done so brilliantly that these small issues do stand out which when fixed make it so much more impressive.

1. In the scrolling of the levels, there is some bug that jams the scrolled for the first element or the last element. It is almost a wrestle to select the first level (when the second level is still locked)
2. It is nice to have social inclusion in the games, the facility to tweet is great, but the app breaks out and starts twitter in safari and going back to the app is like restarting the app. If tweeting could be managed from inside the app, it would be so much better.
3. I feel that sometimes spelling mistakes are deliberately caused by the computers to keep us humans, human. But the message at the end of the game that says "Great! You'v rescued" has a missing "e"
Gaming Giveaway iOS Mobile Review