It's called Dobbing, here in Australia

In America it's called telling on someone and the person that tells upon another is called a Snitch. If that makes one wonder what does that have to do with our review today, well on the mac, there are so many things happening and there is a lot of network activity, in fact everytime a new app is added, there are a couple of more new requests to the Internet.

Of course, these apps legitimately need to connect to the Internet, they need to know if there is a new version of the app available, It needs to update some files/data from certain websites. There could also be the other side of the story, where there might be apps that want to connect back to their sites transferring the *data* on the mac, that is scary. Many might have heard of Firewalls, a Firewall is a protection Layers that keep the outsiders out, so it will prevent the possibility of someone getting into the network. What do you do when you have an insider into your network, that sends data out. Firewalls cannot do much for this issue, they are the front line soldiers that work on intruders from outside.

Little Snitch is a wonderful utility that works on this gap, the inside intruders, and hence it is called Little Snitch, it snitches on all apps running.

Little Snitch is an engine that loads up with at startup and then the other part the Rules Editor sets up the rules of which apps are allowed and their privileges. 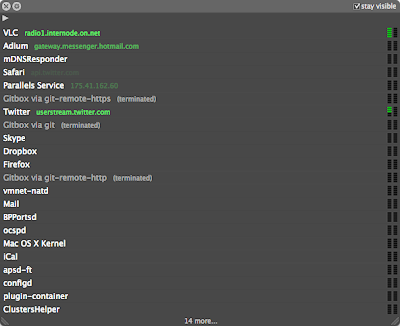 This shows a realtime list of data transfer by the Apps currently active in memory. The rules editor is a simple list of the apps and the rules of what their privileges are. It is similar to a firewall rule, or a iptables entry (for those that work with *nix type systems and have IP rules) the only difference is that this is all GUI based and easy to manage. The best part of it all is that the first time an app tries to connect outwards, Little snitch pops up a window to set the rules, Rules can be set for an apps access, either for that one time, or for the entire lifespan of the applications (until Quit) or forever so that it does not show up that request again. 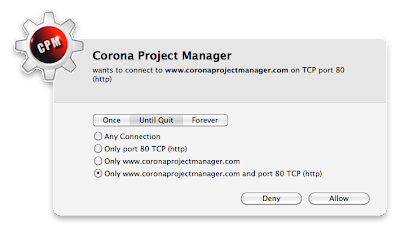 The rules can be set to accept or reject. This is the most common outcomes, when a window pops up in the middle of that moment totally engrossed in work, the common reaction is to click without reading what the popup states. If a rules is set up wrongly, the rules can be edited via the Rules Editor. 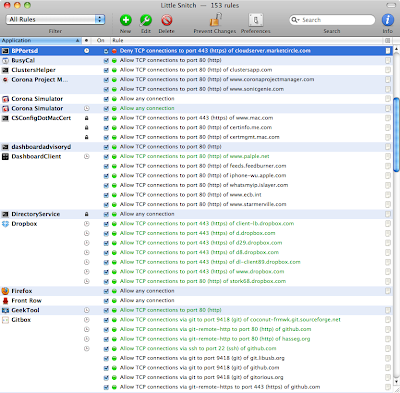 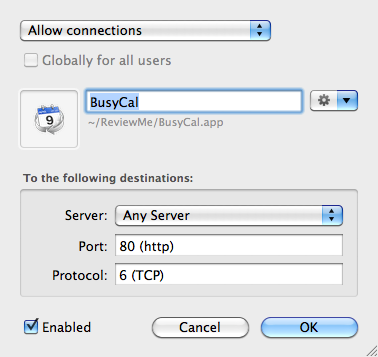 As a developer I was aware that practically every software dials home to check for updates, I just added a quick version check in one of my apps and it showed up immediately for permission, I could simulate what would happen if I did not have a network connection. So the uses of Little Snitch are how it can be used. The scenarios are unlimited.

Generally users would be contended with what app is trying to connect to what website. This does not do packet sniffing and low level packet capture, if the requirements are to peek into the packets, then Little Snitch is not the tool.

There are also the *underground* uses for Little Snitch, for those that do not follow us or participate in our giveaways to get legal licensed software from the developers/manufacturers and use those that are generally found from the back of a truck and serial numbers scrawled on the bathroom walls can use Little Snitch from communicating on the network. We condone the illegal use of any software or Piracy. We are just trying to enumerate the use of Little Snitch and the scenarios it can be used in.

If the Mac does get infected with Trojans and viruses, Little Snitch will not clean the virus or prevent it from infecting other files or apps, but it will definitely stop them from spreading your data around or providing a backdoor to hackers and the likes. Another word of caution, it is as intelligent as the rules set on the system. If a particular backdoor is allowed and granted access, then of course there is very little that Little Snitch can do.

And we have a copy of Little Snitch for one lucky winner, all you need to do
1. Follow @whatsin4me
2. Retweet the message "Read reviewme.oz-apps.com, follow @whatsin4me and RT this msg. You might win a copy of #LittleSnitch from #ObDev.at"
Giveaway Mac App Mac OSX Review Software System Tool