I recollect since the time I had Windows 95, I had been trying various applications to see if they could convert images to text. Yes, OCR is the correct terminology. I recollect WinFax, I had that running on the computer and it was all connected to a UPS and a Spike guard and every time the phone rang, the computer would automatically start-up and be ready to receive the fax. This app has nothing to do with Faxes.

At the same time, my first scanner was a Black & White hand held scanner, it looked like a Gigantic Brush without the bristles. and I had to run the scanner over the text or the matter, sometimes I would go too slow or sometimes I would pull hard going too fast.

The point that I am trying to make is that I have been trying to scan stuff right from those times around 93/94 While I was employed in the Publishing sector, I recollect getting scans done as very high resolutions using the drum scanners and copying them back on Jazz drives. However one of the issues that I always faced was printed material from Publications, Printed articles or books that have a spine cause a strange curvature in the resulting scan. This has been the largest cause of grief in personal scanning of magazines and I had to literally split some magazine spines to get a good even scan, but in some case it is difficult to use a destructive method with maybe library books, etc.

They say that first looks are not everything and beauty is skin deep, that is so true. The first time when I read a description of Prizmo from Creaceed Software, I thought of it as just another software that uses digital media as a source and runs OCR on them. I had used quite a few OCR products in these last few years and I mean what is so special about yet another OCR software, right? So with a biased mind, I set to test the software. On startup, it had a window with an animated arrow and it indicates that I can drag drop an image on to that window to start the process.
On dropping an image, it shows up and asks to locate the four corners. This is an important step as this is used in angular correction, so if the four corners form a trapzoid, the image is skewed in perspective. The best part is that the entire processing is done in real time, so as you move the corners, the images changes. Here's a picture to show what it means. 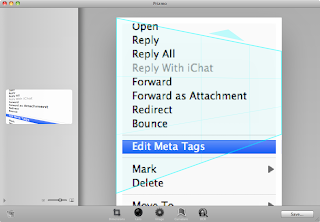 There is the option of Curvature correction (One of the main highlights of this app). So for the scans that are curl up due to the spine of the magazine/book, with the curvature control tool of Prizmo, those scans can be fixed. The image in the left had side that shows a preview of the correction can be saved as an image. To recognize text, Prizmo offers the options of binarization, before you balk at the word and think it is about binary splitting, not really, but close. It is about adjusting the B&W dithering of the image where the text can be seen best for recognition. This is a user controlled option.

I did try to recognize text with the image of a Mac App Menu. This is text and should recognize something. I got nothing from it. That was a bit disappointing. If there is no OCR result, Prizmo should atlest let me know that the resolution of the image is too low or no text could be recognized. On testing it with a hi-res image, OCR worked fine and the text recognized is highlighted in the image window.

Here is a sample of some Cab vouchers with a very horrid font, that is sometimes difficult to read even by humans. As seen in the image, the blue rectangles are the recognized areas of text. The thing that I personally did not appreciate was that the software breaks up these areas on its own accord. So some lines that are continuous when broken are meaningless even if OCR'd. And the top lines on the left hand side of the image, which read Taxi followed by another Taxi underneath, Prizmo recognized the first one as Taxi and the second one as Tahi. Changing the binarization setting, I could get it to read Taxi. On the Right hand side Reciept, the Invoice No was recognized as Invoice Ho,and all the headings were recognized as one block and the numbers as another. It would be nice if the software allowed the user to mark areas of the image to get the OCR results accordingly. 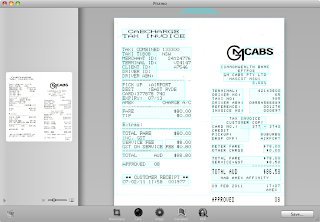 All in all, at first, the description of the software gave me an impression of the software being something totally different, but on using it with a little patience and different files, I could realise what the software can really do and it is powerful and packed with some good features. This is a good companion software for students, Academics, businesses etc that use a scanner and work with images. This serves two main purposes,
1. Image Correction (Not colour correction or FX, etc) - the Image curvature, perspective, etc can be corrected with Prizmo.

2. Optical Character Recognition (OCR) - The image can be recognized as editable text.

To test the capabilities, I used the same receipts and distorted them and saved the resulting distorted image. Then opening the distorted image, I tried to correct the image. Here are the two resulting images. 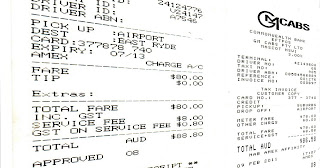 When OCR was run on this image, words like CARD showed up as (3ARD and EXPIRY as EHPIRV, so the distortion did affect the quality of the text that could be recognized. But the correction was impressing, I am not exactly aware of other software that allow correction of images using wither perspective or curvature correction.

Here's an example of curvature correction from Prizmo's site.

Creaceed have priced this as quite affordable, At $49.95 this is an excellent tool that allows correction of scanned images. If your work is involving images and scanning from Books/Magazines, this is a tool that you have to have. The price lets hobbyist to dabble in with Prizmo too. For those that want to test drive it,

And we have a copy of PRIZMO for one lucky winner, all you need to do
1. Follow @whatsin4me
2. Retweet the message "Read reviewme.oz-apps.com, follow @whatsin4me and RT this msg. You might win a copy of #PRIZMO from @creaceed"
Giveaway Mac App Mac OSX Review Software Store Tool