Now working on a Mac as my main machine, it is rather difficult to switch back to windows, for the subtlest of things. If an update or setup is hogging the screen, Expose and spaces do not come to the rescue, these are so an integral part on a mac, but on windows it is so much missing

There were some attempts at mimicking Expose, but it wasn't up to the mark. There was an attempt to mimic spaces with Dexpot but it is too slow. However on the Mac, spaces is a real help but there are times when it is a bit unclear on which workspace is active. Now pressing the keys to swap between spaces will show a graphic, but doesn't every Mac owner want to customize the desktop and workspace, each being different and unique?

Introducing Hyperspaces from Cocoabots ( http://thecocoabots.com ) They released a beta version of hyperspaces around December of 2009. We got a copy off hyperspaces around the same time and it felt like an extension of the system, though it was work in progress, it never caused a crash or issues that made it stand out.

Now Hyperspaces has reached the milestone cocoabots were aiming for, it has reached version 1.1 and the free versions that all of us were used to is now gone. It is now available on the Mac App Store for $9.99 (introductory price) which shall soon change to $12.99

Some of the features/enhancements that Hyperspaces brings to spaces are
Small things that have gone into the making of Hyperspaces make it a pleasure to work with. In the Menubar, one can set the Space number as the icon or just the icon or the textual name of the space. This is also visible on the screen and can be set to be in one of the 9 areas of the screen ( divide the screen into a 3x3 grid ) 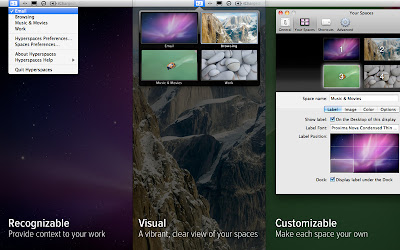 If you are a visual person and would want to brand your workspace then look no further, this is the software for you. Hyperspace is what spaces should have been.