Locked out? Atleast look good while at it.

For those that have an iOS device and look at your friends that have jailbroken and have these amazing lock screens, don't you wish that you had something like that? Apple has a policy where they do not really allow widgets to be used, as it can slow down the system and crashes can cause instability
I recollect in the early 2000 when Microsoft ruled the roost with their PocketPC, they had something called Today, it was an amazing piece of technology that allowed developers to create and add widgets into the today bar. The most common and beautiful was the Today wallpaper that changed based on the day of the week. A set of 7 banners were used to achieve this effect. Then there were several launchers and widgets for battery life and space on the device.

Now 10 years hence, Apple rules the roost, and they dislike any such customisation, they are of the opinion that their designers know best and have provided the users with the best possible setup apart from technical issues (in is my opinion).

Brandon Treb, a fellow developer that I have been following on twitter and blogs (some really wonderful articles) has released Smart Lockscreen Creator. On first glance, the screenshots confirm every iOS users dream, widgets on the lock screen. When I got a review code for the app, I was quite exciteed to see how it was executed and more so on how did Apple approve this. (Some Apple iOS reviewers are more considerate than some that are straight out of hell, so there could have been a possibility). 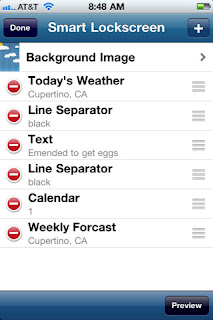 On running the app, it presents a ListView where one can add the various widgets then preview the screen and save it. The excitement was short lived, when after saving the app notified me that the image has been saved in the Camera Roll folder and I can set it as the wallpaper. :(

It is purely my fault as I did not read the text above in description (usually hidden unless you click on more to expand it), but the screenshots led me to believe that widgets were finally there. 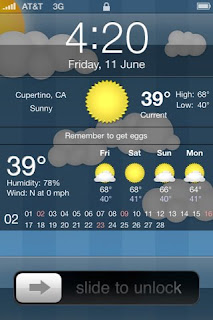 I did not add weather widgets assuming that the widget might update the image on a daily or periodical basis eating up my precious download quota, only to find that everytime I want an updated Lockscreen, I need to recreate the image. The good thing is that it creates a retina image on the iPhone4.

Here, if the name of the image that is created is kept constant, it might actually help to create a refreshable Lockscreen, than to create a new image and set a new image everytime as the wallpaper.

The idea is not new, there were a few apps in the past that allowed creation of wallpapers for LockScreens specifically aimed at creating "IF FOUND RETURN TO" type LockScreen wallpapers. The app is quite well created and works well. If you do wish for a customised LockScreen, Go ahead and give this app a go. The app is available for $0.99 on the iTunes store ( http://itunes.apple.com/app/smart-lockscreen-creator/id419890996 )

My qualm with this app is that it applies the image to a smaller portion of the screen, the same image is my current wallpaper and covers the whole screen, where as the LockScreen generated has the same image in 1/2 the screen leaving quite a few blank black areas. So if this is fixed, it might be useful or provide the option of fullscreen image and half screen image.