Are you a developer that has heard of CoronaSDK from Anscamobile? Or maybe heard about the kid that made the wonder game that had more than 4 million downloads? Now that number is up to over 7 million and there are so many new features included with Corona SDK that it makes creating mobile apps child's play
This review is not about Corona SDK. Developers will vouch that a very essential sticking point for an environment is the IDE. Those that have used Visual Studio or xCode will agree that if it was not for the IDE's these might not be so widely used. Using Notepad, Textedit, TextMate, TextWrangler are good alternatives, but one of the challenges faced by a beginner is the syntax. If the syntax was not such a big issue then any plain text editors would suffice.

There are many alternatives, including one where we have made available the list of keywords for xCode which allow xCode to be used as the IDE for developing for Corona.

From Michael Hartlef comes this lovely offering tot he Corona Community at large, IndieEd, it is a fully featured editor that fills in the gaps. It is the first iteration and works well. It is usable, but a few cosmetic changes could make it very useful (visually).

It is a complete shell for managing the projects, it has four sections, one for the lua files in the project, the editor itself editing one of the lua files, another than parses the functions in the file and displays a list of them (It would be so much easier if this was a drop down like in xCode, it would provide more space for the editor) and the last one houses the messages (if you run the project from the editor) or search results. 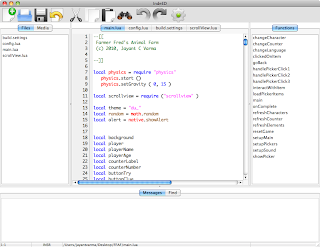 IndieEd as it is is a boon to every developer using Corona SDK on the Mac, it is the answer to their prayers for an IDE.

However being a critic, reviewing this software, I think the icons could do with being slightly smaller and beautiful. The functions list could be a drop down, Auto completion is a bit strange as the shortcut key is set at Ctrl but pressing control does nothing and on my system it is set to a different application. Some auto-complete suggestions are not present, like the constant display.HiddenStatusBar.

We would recommend that you head over to the website at ( http://forum.whiteskygames.com/viewforum.php?f=9 ) and register for free and download a copy and start developing.

This software is free for the moment, however when you see the about box, there is some indication that the software might be charged at a latter time. So get your copy now.
Developer Development Gaming Mac App Mac OSX Review Software Text Editors Tool