When you buy a Personal Computer, be it running Unix, Mac OSX, or Windows, there is always this inherent need for another one to run an alternative OS. Well, easy you say, Dual Boot, Triple Boot and so on, the Bootloader shall handle whatever you throw at it provided you have enough space on the HDD to hold the OS.

I recollect the times when I had to test some servers. In those days, the only way to do was to pick a spare computer and set it up as a server. This was fine till I was at office, where I had access to several machines, what about the times when I was at home, in a way, I could use a dial-up connection to connect (For those that have never heard "dial-up", it is a remote connection using the telephone system as in those days there was no always on internet/broadband). Then even if I had access to two laptops (portable solution) I had to have a hub, some CAT5 cables or use a twisted pair for direct connectivity.

In short, it did work, but very inconveniently. Then came the buzz word virtualisation, machines could be virtualised, it was supported on the Processor itself. So in the past where the software would emulate the processor, now, the app could use the processor natively (for the OS that used the same architecture) thereby reducing the overhead of emulation stacks. Displays were created using generic drivers and devices that offered simple display modes, now virtual machines can offer 2D acceleration and even 3D capabilities.

I first heard of Parallels when I was given my first Mac, It used to be Version 3 with a version 3 upgrade key included. It introduced some really RAD things like Coherence where you could see a Windows app on a Mac Desktop, the windows Desktop was hidden the desktop was the Mac OSX desktop, it would even place the running windows app in the Dock just like any native OSX app.

Though I had purchased a copy of Parallels, it just did not work for me and I had moved on to alternative softwares. So, while I heard a lot about Parallels 4, and then 5 being really amazing and then 6 being the next best thing after slice bread, it was time to head back to Parallels and take it for a spin.

On Startup, a small window shows up that lists all virtual machines, adding existing ones from alternative software is also easy. However when you start the same, it request for a conversion to parallels. This can be buggy, hence the best way is to have a fresh start. I tried to convert a configured instance of windows 7 (after duplicating it in a new spot) it gave me a few errors and took very long, but on persistantly being at it, in about 3/4 tries I got to the logon screen (despite the last time windows telling me that the machine had to be repaired and the repair failed etc)

The listings can be colour tagged as required. Configuring the settings is easy, right click and choose settings. The settings window pane is quite neat and user friendly. The number of CPU's to be allocated to the virtual machine can be set along with the amount of RAM allocated. Under the Options Tab, all settings relating to how the machine should function with the host are set, things like Automatic Start, StartupView, On Shutdown, on StartUp. Then other settings like coherence, full screen, modality, etc. Finally, under hardware, I did not understand why despite me having a 1GB Display on my iMac, it offered me a maximum of 256 MB for the Virtual Machine.

The virtual machine is fast, there are some visual enhancements that make the experience really something special. A picture is worth a 100 words, have a look.

It does what it is expected to do, however on a 3.06GHz iMac with 4GB RAM, and 1 GB allocated to Windows 7, it is blazing fast. With 3GB and 2 CPU's allocated , it is better than a physical machine in all respects. My Toshiba Laptop running windows 7 with 4GB is sluggier than this virtual machine.

Another feature that was really appreciated and a great innovation from Parallels is the Suspend on inactivity, when there is no Windows application running, the Guest system is suspended to free up all CPU and RAM to the host system, and on starting a windows application, the machine is resumed. The resume is almost instantaneous, so it might be only freeing up the CPU cycles, not RAM. This is also a painful activity, I had visual studio being installed in the background and it suspended thereby making the install a lengthier process than required. How is the Inactivity decided? Maybe that needs to be worked on in the updates.

Parallels with version 6 have taken this another step ahead, they have allowed for remote administration of the virtual machine using an iPad or iPhone. The iOS add-on is free to download.

Connecting from a mobile device is very easy. If you have every used a VNC client, this is similar, however being a Touch based device, it is a bit difficult to perform mouse based actions, but Parallels have thought of that and they make it easy to work using touches. 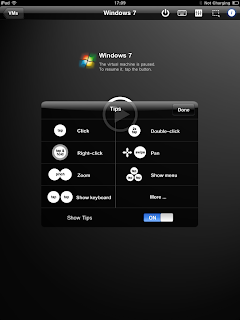 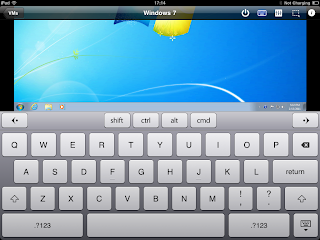 Parallels 6 is a new improved 64-bit engine that makes full use of the newer CPU's, but in our case, when I looked into Activity Monitor, Parallels showed up as an Intel app, not a 64-bit app. In a comparison between Parallels 6 and a competing product, Graphics and Gaming Graphics both clocked in at 6.0 for both the apps, 6.7 for the CPU and 6.7 for Hard Disk access, where CPU is .1 better than the alternative and 0.2 lesser in HDD Access. In terms of RAM, a score of 5.5 (even with 4GB) is surprising where on the alternative offering, the score is 7.9 and increases with more RAM.

Parallels has grown since the earlier versions and today is worth every cent invested into it. The ability to work with the VM using an iOS device included for FREE with the Desktop version license is in itself worth a lot. You can run a variety of OS using Parallels and if you have the RAM, it will work.

One thing that we wanted to mention, the reason for this being included in our Mobile/Game Development theme is that when it comes to gaming, Parallels has no parallel. It is the platform for windows gaming on a MAC.

For those that love to see windows dressed up in Mac UI, Parallels offers you a menu option called Mac Look, it downloads the UI pack and applies it to windows and removal is as simple as just unchecking that menu option to revert back to the windows UI

Parallels have made available for one lucky reader a Boxed copy of Parallels 6.0 for the Mac.

1. Follow @whatsin4me
2. Retweet "Win a free copy of #Parallels6 follow @whatsin4me and RT this msg."
or
head over to our Facebook page and like our page at http://www.facebook.com/pages/ReviewMe/137640632964588?v=wall and post a comment under the review that you want to win a copy of this software.
Developer Gaming Giveaway iOS Mac App Mac OSX Review Software Tool Windows