A Cut into the grass 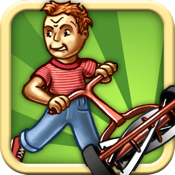 Our theme for the month is Mobile/Game development and we thought what a better way to start it than to feature a mobile game. We have for you a game from Dohi Sweden called Lawn Mower Kids, the best part of this is that it is available in both formats, the iOS and the Mac App, so either you can play it on your mobile devices or on the Mac.

The concept is very simple, you have a team of three kids each with a different type of mower and the aim, you guessed it, mow the lawn. However you have time constraints and obstacles. Each kid has abilities, (no not super powers) and mow the lawn at different speeds.

The graphics are interesting, bit retro and nostalgic. The lawns and the obstacles keep increasing in difficulty.

While testing this game, there were a few things that were confusing. Every time that a long stretch of the lawn was mowed, it displayed a -1, where as whenever the flowers were cut by Tim, the kid with the blue lawn mower, it displayed +1. Now logically thinking, -1 is not good, where as +1 means good. So, I ended up cutting the flowers to get a series of +1. I realised later that the +1 or the -1 was added not to the score but the time, and there -1 was a good thing and +1 wasn't.
Animals roam the lawn, the cat generally keep crashing into the kids other than Nancy who rides a mower and cannot be affected by the animals. Tom knows how to dodge the ball, so when kids play in the yard, Tom is the only one that can get through.

The game starts with a set time allocated for the level, and with passage of time this reduces and the icons change from a Gold to Silver to Bronze medal. The kids can be managed simultaneously. Draw the path for the kids and they shall keep mowing on that path.

While drawing, the game sometimes does not recognise the touch, specially at the edges of the fence (not the phone) and stops to draw the line and causes breaks in the mowing path you are trying to draw. It gets a bit frustrating. I have tried this on the iPhone and it works fine, I have tried this on the Mac with a trackpad, it is rather unfortunate that apart from Angry Birds, no other developers have started to use the trackpad functionality, specially since Apple had hinted that Lion (new OS X version) will hinge on the trackpad for gestures, etc.

The game is developed using a in-house modified version of torque and therefore can be ported to various platforms, I cannot see a Windows PC version for LawnMowerKids, but it is just a matter of time.

In short, a nice game that keeps you occupied, The Mac App version is FREE till the next release. So get your copy for either of the platforms (MAC / iOS) It retails on the iTunes Store for $1.99

And we have a PromoCode of Lawnmower for one lucky winner, all you need to do
1. Follow @whatsin4me
2. Retweet "To win a Promo Code for #LawnMowerKids follow @whatsin4me and rt this message"
Gaming Giveaway iOS Mobile