There are times when you need to take a screenshot for whatever reasons. The most common method on Windows is Prt Scr and On a Mac, Cmd+3 or Cmd+4. This then lets you crop/alter portions of the screenshot that you want to hide. Taking screen captures of the foremost window or windows without the shadow, or a webpage (and the list goes on) soon tends to become a very complicated task. I have used quite a few screen-capture tools for both Mac and Windows, both free and paid, but never have I come across one that offered so much functionality and ease of use.

Layers offers a few modes for capturing, namely WebShot, AppShot, Full Screen and Front Window. Now before you think so what's the big deal with that. It creates a PSD (Photoshop) format for your screenshot and if you want you could have it in the PNG format. The exciting part is not just creating a PSD, but as the name suggests Layers in the PSD. Layers of what you ask... Layers of the Open windows and elements on the screen.

So, if you were to take a screenshot of the Entire Screen, you would get in the resulting PSD, the desktop, the dock, the menubar, utility windows, application windows, each in its own Layer/Group.

With the AppShot, you can get each element of the scrollbar, sidebar, drawer, etc as an element in the layers.

In case of the WebShot, it creates a stitched image of the entire webpage not just the visible area that screenshots would capture. I can only say that from the time I have been trying Layers, I cannot imagine how I have lived taking screenshots without this tool. It is almost like when I got my iPhone3, it was how could I have not had an iPhone3, and when I got the iPhone4, it was how did I ever use and feel so great about an iPhone without Retina Display. 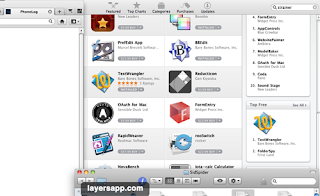 Here is an example of how the windows we want to capture might be obscured by another, with Layers, since each is a layer, you can position any window over any other and move them around the screen or switch their visibility off.
Update:I use a firefox plug-in for saving the entire page or visible portion as an image. And when the page is too long ( over 32767 in height), it clips the image. However, I guess the developers at Wuonm have to look into that and assert a condition to exit. In my case tLayers went on and on and on and nearly froze the machine, it overlays a window so you cannot see the Activity Manager, cannot kill Layers, nor can you access it in the menubar as it has crashed. Since I have been using this plug-in for Firefox before I tried Layers, I was aware of this issue and had a few pages that let me test this behaviour. Here's one that you can try on your own, plus it has pictures of the beautiful capitals of the world. http://www.topdesignmag.com/superb-pictures-with-all-the-national-capitals-of-the-world/
Layers is the smoothest and the best screenshot application that can be found today. I would say it is the iPhone4 while the other screen capture apps are like the iPhone3. You can try the demo version from their website that is not time limited, the only caveat is that it overlays watermark text on top of the captured layer(s). It is available both on the Mac App Store and from its Website for $ 24.95 and as we at ReviewMe attempt to do, we have a license of Layer to giveaway for one lucky reader. To be eligible to win the Free License, you need to follow @whatsin4me and retweet "I read reviewme.oz-apps.com, followed @whatsin4me and I could win @layersapp license for FREE, RT if you would want to win"

In the movie Shrek, the conversation between Shrek and Donkey went a bit like

Now, not everybody likes onions, but if you try out Layers, you will definitely love Layers.
Giveaway Mac App Mac OSX Review Software Store Tool