When I first got my Mac Book, I was a hardcore Windows user. I would not have moved if Apple had not gone the Intel way. Macs are good for graphics and they do not crash as often is what I had heard about Macs. So, now that I had my first Mac, I was excited. It so happened that I needed to make a diagram/picture, under Windows I would generally fire up MSPaint and task accomplished, with my MacBook (Tiger) what do I do?
Somebody suggested that I look at GIMP, it is the greatest and best software, most of all it is free and multi-platform. I won't get into details, but for someone wanting to fire up a graphics application on an OS that is known for its graphics capabilities, it was a living nightmare.
One of my colleagues had an app that I could use on their machine to create the graphic. I had worked on PhotoShop 7.0 under windows, this app reminded me so much of that. I wondered if it was how Photoshop for Mac looked like, that little FireStarter app which was launched at the time has come a long way. 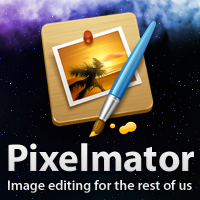 Photshop has established itself as the DeFacto standard in the world of Graphics for image manipulation. So everyone comes to expect functionality like layers, masks, filters, transforms, PSD format to name a few. Pixelmator has been work evolving since the first version, today it stands at version 1.6.4. Some features that it offers are
* Compatibility to over 100 file formats (you name it and you've got it)
* Layers - The most important feature for adding features to an image without affecting the image unrecoverable.
* Tool Palette familiar to those that are used to other graphic editors with all functionality that is important
* Filters - There are over 130 filters included and are core-image powered. If you know how to use Quartz Compositor, you can add more filters.


I can recount some of the other features that you can probably read off the website from http://www.pixelmator.com but some of my favourite features that compel me to have this gem on my system is the fact that it is 64-bit (since 1.6 was released).
The functionality of dragging a layer onto the desktop or a folder to save it as a PNG, so no more switching layers off and "Export for Web" unless you want to with the final composition.
Support for Automation via Apple Script (Automator), so you can script certain tasks that you want. It may lack the styles found in Photoshop, but if you can script it right, you can find Automator making up for quite a few things.
It can read and support Photoshop brushes, and with support for graphic tablets, it offers functionality such as jitter and pressure sensitivity.
Another feature that I can't stop loving is the filter rope. It hangs a configuration dialog from the layer that you have/want the filter applied to. (For a while I thought cool UI feedback) the Filter rope acts to set the centre of the filter.
Pixelmator is now available on the Mac App store, and the developers have introduced it at the price of $30 ($60 if you were to buy it online from Pixelmator or affiliate sites). The Pixelmator Team is planning to have one version, the Mac App store version in the future. So it is an indication to all that you might want to consider moving to the MacApp store version, it is cheaper and will have updates for life until version 3.0 .
Some might call it the poor man's Photoshop, which is entirely wrong, coz it is definitely not in the price range of the types of Photoshop, but it definitely is not a Poor Man's anything. The correct Analogy could be it is the Designers Pixelmator. It can and is being used by novices and advance users alike. Pixelmator is graphics editor that Mac OS never had, It completes the OS with a graphics program for a new user. Apple must consider bundling Pixelmator with every new Mac sold. It has a small footprint and absolutely no lack of functionality. It was worth the $60 that a lot of users paid for, at $30 it is a must have. 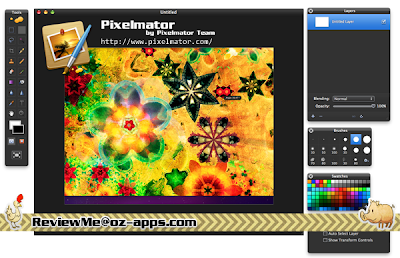 And we have a copy of Pixelmator for one lucky winner, all you need to do is
1. Follow @whatsin4me
2. Retweet "Read reviewme.oz-apps.com, follow @whatsin4me and RT this msg. You could win a copy of @Pixelmator from #PixelmatorTeam" 3. The winner drawn at random shall be announced on the 23rd of January 2011 via twitter

Alternatively if you are a facebook user, you can go to the ReviewMe facebook page at http://www.facebook.com/pages/ReviewMe/137640632964588?v=wall and like us and leave a comment stating that you would want a free copy of Pixelmator.
Giveaway Mac App Review Software Store Tool